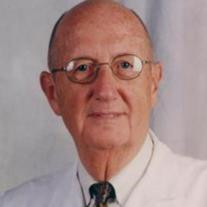 William Paul Smedley, M.D., F.A.C.S. passed away peacefully at Wilkes-Barre General Hospital on Monday, October 29, 2012 with his family at his side after courageously battling a debilitating illness since September, 2007. Dr. Smedley was a graduate of Valley Forge Military Academy, King’s College, Wilkes-Barre and the Stritch School of Medicine of Loyola University, Chicago, IL. Additionally, he served as a captain in the 402nd Military Police Reserves. He was a Fellow of the American College of Surgeons and a member of the American Board of Surgery. Upon completion of his internship at Wilkes-Barre General Hospital, Dr. Smedley served his surgical residency at Geisinger Medical Center in Danville. He achieved the position of Chief Surgical Resident during his last two years under the direction of his mentor Dr. George T. R. Fahlund. He later completed graduate studies in clinical hypnosis at the University of Pennsylvania. Returning to Wyoming Valley in the early 1960’s, he built his medical practice specializing in abdominal disease, trauma and general surgery and eating disorders. Dr. Smedley was often referred to, affectionately, as the “Gall Bladder Doctor”. Dr. Smedley was a professor in the Advanced Trauma Life Support Unit at Geisinger Medical Center in Danville, the co-founder of the Luzerne County Community College Surgical Operating Room Tech Program in Nanticoke, and both an adjunct professor at Temple University Medical School in Philadelphia and the King’s College Physicians Assistant Program in Wilkes-Barre. Dr. Smedley was the football team physician for Bishop O’Reilly High School, Kingston from 1973 until its closing in 2007. In addition to his accomplished medical practice, Dr. Smedley was an inventor whose innovative developments have local and global recognition and use. These include the laparoscopic sponge and the Long Reach Laparoscopic Right Angle Dissector, an instrument used in gall bladder surgery. He was also the accomplished and recognized author of three books: The F.A.T. Book, a tome about gall bladder disease; The F.A.T. Book Cook Book, which lists recipes for those suffering from gall bladder disease and includes his special six week low fat diet designed to prepare his patients for successful gall bladder surgery; and Mom, Do I Look Fat?, a definitive text concerning the medical causes of anorexia and bulimia. Along with his medical practice, Dr. Smedley was a Fourth Degree in the Knights of Columbus, Extraordinary Minister of Communion at Wilkes-Barre General Hospital and a long time member of the Westmoreland Club in Wilkes-Barre. Regardless of his accomplishments, he was first to put his children’s interests ahead of his own. Dr. Smedley’s hobbies included gardening, music, shooting, writing and dining with his wife and family at Hottle’s, Perugino’s, Agolino’s and Villa Foglia. His passions and hobbies also included anything that was the interest and passion of his children. Dr. Smedley was preceded in death by his parents, William P. and Regis Farrell Smedley, father- and mother-in-law, Thomas J. and Anna Kennedy Moran, and son-in-law, James Cowan. He is survived by his wife of fifty-three years, Catherine Moran Smedley and children: William P. Smedley Jr. and his wife, Sandy of Swoyersville; Paul C. Smedley and his wife, Denise of Pittston; Katie Smedley Cowan of Orlando, Florida; Jane T. Smedley, Esq. of Swoyersville; and Anthony N. Smedley, Esq. of Philadelphia. He is also survived by his sisters, Mary Regis Lavin and Margaret Smedley of Ohio; his brother, Robert and his wife Marian Smedley of Philadelphia; numerous nieces and nephews, and cousins. The Smedley Family extends their deepest thanks to the medical professionals and facilities that cared for him, and more importantly, believed in the miracle of our Dad’s recovery over the last five years, in particular, Dr. Kish, Dr. Boonin, Dr. Harostock, Dr. Gerhart, Dr. Ellis, Dr. DelGaudio, Dr. Delahanty, Dr. RuDusky, Dr. Stepanitis and his good friend, Dr. Ottavianni. Celebration of Dr. Smedley’s Life will be held Monday with a Funeral Mass at 10 AM in the Church of Saint Ignatius Loyola, 339 North Maple Avenue in Kingston. Interment will be in Saint Mary’s Cemetery in Hanover Township. Visitation will be held in the Church of Saint Ignatius on Sunday from 4 to 8 PM. In lieu of flowers, memorial donations may be made to the Parish of Saint Ignatius Loyola. Arrangements by McLaughlin’s – The Family Funeral Service. Permanent messages and memories can be shared with The Smedley Family at www.celebratehislife.com

William Paul Smedley, M.D., F.A.C.S. passed away peacefully at Wilkes-Barre General Hospital on Monday, October 29, 2012 with his family at his side after courageously battling a debilitating illness since September, 2007. Dr. Smedley was a... View Obituary & Service Information

The family of William Paul Smedley MD, FACS created this Life Tributes page to make it easy to share your memories.