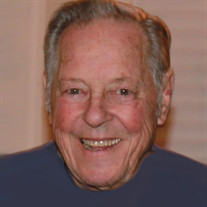 William J. Keating, 85, of Hanover Township, joined his beloved wife, Mary Rita, “Marita”, (Tershak) Keating, in Eternal Life on August 10, 2020, what would have been their 52nd wedding anniversary. Born November 2, 1934 in Wilkes-Barre to the late Victoria Iorio Keating, he was a proud 1953 graduate of Meyers High School. He served his country in the United States Army during the Korean War Conflict receiving Honorable Discharge in 1956. Bill worked for Holland Furnace Company for a time, tended bar at the Café Gourmet, and graduated from Barber School to open his own shop on Wood Street in Wilkes-Barre. He loved being a barber and being around people and continued to enjoy his line of work continuously for over fifty years on Wood Street, only retiring last year in June, 2019. A devoted Catholic, Bill was a lifelong member of St. Therese’s Church in South Wilkes-Barre until its closing, and then became a faithful member of St. Aloysius Church of the Parish of Saint Robert Bellarmine, serving as an Usher for several years. Bill was an enthusiastic Notre Dame football fan and an active member of the Notre Dame Club of Hanover Township. He was also a member of Lodge No. 61, F. & A.M., Wilkes-Barre, and the AmVets of Hanover Township. He was preceded in death by his loving wife, Marita, who passed away on February 21, 2020, mother, Victoria Iorio Keating, brother James Keating, and sister, Anita Pryor. Bill’s love will live on in a family who adored him, daughter Jennifer Keating Hadley, her husband Rob, who was a son and best friend to him, and the apples of his eye, his two granddaughters, Kendall Marita and Reagan Victoria Hadley, of Pittston Township. He is also survived by sister, Margaret Casey of California, brothers, Father Patrick Casey, Alaska, and Bernard Casey, California along with sister-in law, Mary Keating, Forty Fort, nieces and nephews and friends who became family. The extent to which he will be missed cannot be adequately expressed by those who knew and loved him. Celebration of Bill’s Life will begin Monday, August 17th with visitation from 5 to 8 PM at McLaughlin’s, 142 South Washington Street, Wilkes-Barre, and continue there on Tuesday, August 18th with gathering at 9 AM followed by a Funeral Mass at 10 AM in the Church of Saint Aloysius, Wilkes-Barre. Mask and social distancing protocols will be in effect. Memories and condolences may be shared with Bill’s family at www.mjmclaughlin.com

The family of William J. Keating created this Life Tributes page to make it easy to share your memories.