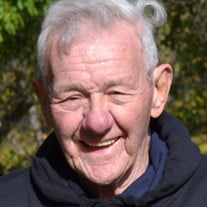 William E. Benis, 83, beloved husband, father, grandfather and great-grandfather, known to the neighborhood and children at school as Grampa Bill, was called to his mansion in the sky on July 18, 2017. Bill entered this world on July 19, 1933 in Nanticoke, born to Joseph and Sophia Benis. He is survived by his wife, Beverly; son, David; grandchildren, Ryan (Courtney), Jordan (Sara) and Brendan (Jesse); great-grandson, Brycen; and his favorite walking companion, Buddy. A veteran of the Korean Conflict, he served as a medic in the Navy from 1952 to 1956. Bill had numerous occupations throughout his life including, pharmacy technician, x-ray technician, and a machinist. His favorite occupation was as a Foster Grandparent at Kistler School. Bill served his Lord and Savior in many capacities also: as an elder, Sunday School teacher, Youth Leader, and had a special ministry to the children in his neighborhood. Bill was preceded in death by his siblings, Jean Bonomo, Betty Belpusi, Ann Modia, Mary Hart, Andrew Spernago, Rose Martin, Julia Chlystun, Josephine Richards, Edward Benis, Dorothy Zotto, Lillian Bailey, Martha Chesko, also at birth were Francis, Margaret, and Joseph. Bill's family is thankful for the kindness shared by the caring staff at ManorCare Hampton House, and for the personal care received from Dr. James Jiunta over the years. Celebration of Bill's Life will be held Monday with visitation beginning at 10 AM, followed by a prayer service at 12 PM at McLaughlin's, 142 South Washington Street in Wilkes-Barre. Interment with military honors will be in Memorial Shrine Park in Carverton. Memorial donations are preferred and may be made to the SPCA, or High Point Baptist Church in Larksville. Memories and condolences may be shared with Bill's family at www.celebratehislife.com

William E. Benis, 83, beloved husband, father, grandfather and great-grandfather, known to the neighborhood and children at school as Grampa Bill, was called to his mansion in the sky on July 18, 2017. Bill entered this world on July 19, 1933... View Obituary & Service Information

The family of William E. Benis created this Life Tributes page to make it easy to share your memories.