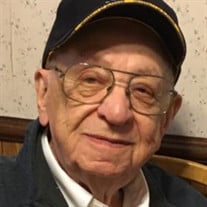 Victor Habib, Sr., 89, passed away on May 15, 2018. Born August 18, 1928 in Brooklyn, New York he was the son of the late Kameel and Victoria Habib. Victor resided in Kingston for the past fifty years. He was preceded in death by his beloved wife, Theresa Habib and his infant son, John as well as his brother, Alfred Habib and his sisters, Laurice Saffi, Evelyne Macoul and Lillian Habib. Victor will be greatly missed by his sons, Victor Habib and his wife Deanna, and Thomas Habib and companion Misa Osada; daughters, Alice Bordner and husband Kurt, Marilyn Haste and husband Jerry, and Evelyne Balara and husband Greg; ten grandchildren, Kristen and Kelly Bordner, Katie and JT Haste, Amber, Rachel and Olivia Habib, and Brendan, Rebecca and Joshua Balara; as well as many other loved family members and friends. Victor was a graduate of Fort Hamilton High School where he enjoyed playing on city championship teams in baseball and hockey. Once returning from serving in the military, he worked with his father and brother in the New York garment industry as well as international exporting. He moved with his wife, Theresa, and their growing family in the late 60's at which time he opened a children's clothing store and later worked as a manager at Sears. In his retirement, he worked for H&R Block. He was a proud veteran of the Korean War and had continued to be an active participant in the Korean War Veterans Association serving as a volunteer and ceremony chairperson. Victor greatly contributed to his community. He was a head fundraiser for Holy Name Church and School where he had set up a scholarship fund in his wife's name. Throughout his life, he served on many PTA boards, was a Cub Pack Master for the Boy Scouts, chaired fundraisers for St. Jude's Research Hospital and the Hoyt Library and, also, volunteered at Geisinger Hospital. Victor was very proud of his children and grandchildren who will always carry his love and his memory in their hearts. His greatest enjoyment in life was his relationships with family and friends. He treasured the time he spent with each of them. He was a most kind and caring person with a sense of humor and personality that made him an immediately likable and memorable person. He had a flair for making new friends and he sustained great relationships until the day of his passing. Victor loved to travel and read and was always planning his next trip or adventure. Celebration of Victor's Life will be held on Monday, May 21, 2018. Family and friends may visit from 10am to 12 noon at the Church of the Immaculate Conception, 605 Luzerne Avenue, West Pittston. A Mass and funeral services will immediately follow. Interment will be at Saint Mary's Cemetery. Memorial donations are preferred and may be made to St. Jude Children’s Research Hospital or the Korean War Veterans Association of Wyoming Valley. Memories and condolences may be shared with Victor's family at www.celebratehislife.com

Victor Habib, Sr., 89, passed away on May 15, 2018. Born August 18, 1928 in Brooklyn, New York he was the son of the late Kameel and Victoria Habib. Victor resided in Kingston for the past fifty years. He was preceded in death by his beloved... View Obituary & Service Information

The family of Victor Habib created this Life Tributes page to make it easy to share your memories.