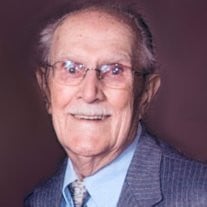 Tudor Roberts, 91, of Provincial Tower in Wilkes-Barre died Saturday, August 24, 2013 after a courageous battle with cancer. Born June 1, 1922 in Kingston he was a son of the late William and Mary Williams Roberts. Tudor was a member of the Class of 1941 of G.A.R. Memorial High School. An Army veteran of World War II, he honorably served our country in the South Pacific as a combat medic in the infantry from 1943 to 1945. Before retiring Tudor was a pharmaceutical buyer for the Pennsylvania Wholesale Drug Company for thirty-nine years and a pharmacy technician at Geisinger Wyoming Valley Medical Center for five years. On November 27, 1943 Tudor married the love of his life, Helen Louise Loch. He died the day before the seventieth anniversary of their engagement. After his retirement, Tudor enjoyed traveling, gardening and making items in his woodshop while listening to big band music. His most enjoyable time was spent with his family. He loved recording video of family gatherings and special events. Tudor was able to spend his final weeks at home with his beloved wife, thanks to the loving care of his daughters, Joan and Judy, his niece Maggie Pugh and the wonderful team from Hospice of the Sacred Heart who ensured his comfort. A brother, Ivor Roberts and sister, Margaret Pugh LaMas preceded him in death. He will be greatly missed by his wife, the former Helen Louise Loch; children, Judith Ann Shappell of Wilkes-Barre, Ronald and his wife Barbra Roberts of Thornhurst, Thomas and his wife Maria Roberts of Kingston and Joan and her husband Scott Brent of Livonia, New York; grandchildren, Scott Shappell, Sandi Shappell Lewis, Gary Roberts, Adele Roberts Warner, Christopher Roberts, Melissa Roberts, Michael Brent, Jenna Brent Beason; great-grandchildren, Amelia Shappell, Emily Lewis, Marisa Warner, Avery, Peyton, Cole and Miles Roberts, Xaiden Brent, Jackson and Leah Beason; nieces, nephews, other family and friends. Celebration of Tudor’s Life will be held Saturday, August 31, 2013 at 2 PM at McLaughlin’s – The Family Funeral Service, 142 South Washington Street in Wilkes-Barre. Visitation will begin at 1 PM. Memorial donations are preferred and may be made to Hospice of the Sacred Heart, 600 Baltimore Drive, Wilkes-Barre, 18702. Sincere compassionate care extended to Tudor at the end of his journey was most appreciated by his family. Permanent messages and memories can be shared with Tudor’s family at www.celebratehislife.com

Tudor Roberts, 91, of Provincial Tower in Wilkes-Barre died Saturday, August 24, 2013 after a courageous battle with cancer. Born June 1, 1922 in Kingston he was a son of the late William and Mary Williams Roberts. Tudor was a member of the... View Obituary & Service Information

The family of Tudor Roberts created this Life Tributes page to make it easy to share your memories.