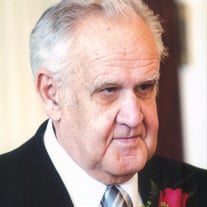 Thomas M. Walent, 87, of Wilkes-Barre died unexpectedly at his home on Sunday, February 26, 2017. Born February 20, 1930 in Larksville he was a son of the late Irene Valent Pringle. Tom retired as a buyer from Acme Markets in 1987 after forty-three years with the company. A former member of the Parish of Saint Vincent in Plymouth, Tom was extensively involved in charitable work there, particularly with food drives which stocked the parish pantry. A member of Our Lady of Czestochowa Assembly Fourth Degree, Tom was instrumental in the founding and formation of Knights of Columbus Council 11901 which was chartered in 1996. Over the years he served as Grand Knight, Financial Secretary and District Deputy. He was chairman of a multitude of activities for the council, including assistance with the church picnic, trips to the Basilica of the Shrine of the Immaculate Conception in Washington, ringing the bell for the Salvation Army kettle drives and sending three forty-foot containers of food and supplies to Uganda. His son, Thomas M. Walent, Jr. died May 27, 2000. A sister, Barbara Figler and brother, Gary Pringle also preceded him in death. Thomas will be greatly missed by his wife, the former Ellamae Michael; daughter, Linda Magistro; daughter-in-law, Sandra Walent; grandchildren, Anthony and his wife Natalina Magistro, Yvette Magistro, Stephen Magistro, Thomas M. Walent, III and Patrick Walent; great-grandchildren, Sophia, Antonio, Domenic and Rocco Magistro; nieces, nephews, other family and friends. Celebration of Tom’s Life will begin Wednesday with visitation from 4 to 7 PM at McLaughlin’s, 142 South Washington Street in Wilkes-Barre and continue there on Thursday with gathering at 8:30 AM followed by a Funeral Mass at 9:30 AM in the Church of Saint Mary of the Immaculate Conception. Interment will be in Saint Vincent's Cemetery. Memorial donations are preferred and may be made to Saint Vincent de Paul Kitchen. Memories and condolences may be shared with Tom’s family at www.celebratehislife.com

Thomas M. Walent, 87, of Wilkes-Barre died unexpectedly at his home on Sunday, February 26, 2017. Born February 20, 1930 in Larksville he was a son of the late Irene Valent Pringle. Tom retired as a buyer from Acme Markets in 1987 after forty-three... View Obituary & Service Information

The family of Thomas M. Walent created this Life Tributes page to make it easy to share your memories.

Thomas M. Walent, 87, of Wilkes-Barre died unexpectedly at his...