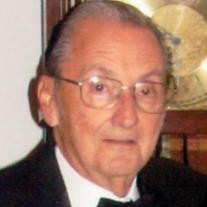 Thomas J. McGrath, 76, of Dallas and formerly of Wilkes-Barre died peacefully in the presence of his loving family on Monday, March 21st. Born October 10, 1934 in Brooklyn, New York he was a son of the late James J. and Frances Kalinosky McGrath. Tom graduated from G.A.R. Memorial High School and attended Wilkes-Barre Business College. Mr. McGrath devoted his entire forty-three year career to the sales and distribution of national food products. He established national recognition in sales and distribution for companies including Lender’s Bagels, Ore Ida Potatoes, Buitoni Food, Dow Chemical, Bosco Coffee and Mrs. Paul’s Seafood, thereby receiving numerous awards from the food industry. He was recognized many times as National Broker of the Year for these organizations, affording him and his wife the opportunity to travel to many parts of the world. Among his trips to England, France, Italy, Spain, Brazil, Germany, Austria, Monaco, China, Africa and Morocco; his favorite included a private audience with Pope John Paul II at the Vatican. Mr. McGrath performed thirty-three years of his career as Senior Vice President and Senior Managing Partner of Hagerty-Schwartz Associates of Philadelphia, Harrisburg and Wilkes-Barre. He was also founder and President of All-Penn Frozen Food Distributors during this time. Every year, nearing St. Patrick’s Day, he was well known for the distribution of thousands of cases of Green Bagels in coordination with Murray Lender of the Lender Bagel Corporation. He first gave the idea to Lender’s to distribute them in the St. Patrick’s Day Parade in New York City: and the rest was history. The following year they made their way into the parades in Wilkes-Barre and Scranton. They were distributed to schools, hospitals, the back porches of many friends and neighbors, and the Friendly Sons of Saint Patrick dinners throughout the area. Mr. McGrath served on the Board of Directors of the Northeast Pennsylvania Manufacturers Association and, formerly, the Board of Directors of the Wilkes-Barre CYC. He was a member of the Knights of Columbus Council 302, Friendly Sons of Saint Patrick of Greater Wilkes-Barre, Donegal Society and Westmoreland Club. He was in regular attendance for the Saint Therese Novena for over fifty-five years and was a member of the Parish of Saint Mary of the Immaculate Conception. An avid Notre Dame and New York Yankee fan, in retirement Tom enjoyed all of his grandchildren’s sports and activities: baseball, basketball, soccer, ice hockey, golf, fishing, cub scouts, and watching his only granddaughter perform Irish Step Dance. He loved spending much of his retired time with his wife and family, vacationing whenever possible. He was a frequent visitor to New York, where he was well-known in Manhattan for making his own parking spots. With a love for gardening and cooking, he was happiest when hosting parties for family and friends. When he wasn’t with his family, he could always be found roaming the aisles of Wegman’s. His loving wife, the former Florence Ann Klein, survives him; they would have celebrated fifty-four years of marriage on June 29th. He will also be missed by his children, Thomas, Jr. and his wife Debbie of Shavertown, James and his wife Mary of Forty Fort, Mary Ann and her husband Rick Roberts of Dallas, Michael and his wife Peggy of Wilkes-Barre and Sean of Harvey’s Lake; grandchildren, Thomas, III, Patrick and Christopher McGrath, Brian and Kevin McGrath, Kathryn and Matthew Roberts, and Michael McGrath; a sister, Barbara and her husband Nicholas Alexander of Ocean, New Jersey; many godchildren, sisters- and brothers-in-law, nieces, nephews and cousins. Celebration of Tom’s Life will be held Thursday at 08:30 AM from McLaughlin's Family Funeral Service, 142 South Washington Street in Wilkes-Barre with Funeral Mass at 09:30 AM in the Church of Saint Mary of the Immaculate Conception. Interment will be in Saint Mary's Cemetery in Hanover Township. Visitation will be held at McLaughlin's on Wednesday from 4 to 8 PM. Donations in Memory of Thomas J. McGrath are preferred and may be made to King’s College, McGowan School of Business in Wilkes-Barre, or Wyoming Valley Children’s Association in Forty Fort. Permanent messages and memories can be shared with the McGrath Family at www.celebratehislife.com

Thomas J. McGrath, 76, of Dallas and formerly of Wilkes-Barre died peacefully in the presence of his loving family on Monday, March 21st. Born October 10, 1934 in Brooklyn, New York he was a son of the late James J. and Frances Kalinosky... View Obituary & Service Information

The family of Thomas McGrath created this Life Tributes page to make it easy to share your memories.

Thomas J. McGrath, 76, of Dallas and formerly of Wilkes-Barre...