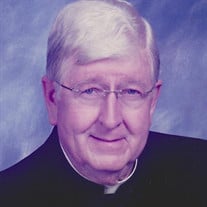 The Reverend Thomas L. Burns, SCJ, a Wilkes-Barre native, died Saturday, June 23, 2018, in Pinellas Park, Florida after a lengthy illness. Born September 12, 1938, he was the second of eight children born to the late Thomas L. and Dorothy Ann Dugan Burns. Father Tom was a 1956 graduate of Saint Mary's High School, Wilkes-Barre. Father Tom spent one year studying at Dehon Seminary of the Sacred Heart in Great Barrington, Massachusetts; and went to the Sacred Heart Novitiate in Sainte Marie, Illinois for a special year of training for the religious vows, which he professed on September 8, 1958. After four years of college at Kilroe Seminary of the Sacred Heart in Honesdale, Father Tom began his study of sacred theology at the Sacred Heart Seminary and School of Theology in Hales Corners, Wisconsin in 1962. On December 28, 1965, he was ordained to the holy priesthood at the Church of Saint Sebastien by the late Bishop Roman Atkielski of the Archdiocese of Milwaukee. On January 2, 1966, Father Tom celebrated his first solemn Mass in his home parish of Saint John the Evangelist in Wilkes-Barre. Father Tom’s first assignment led him to Massachusetts where he was appointed to the faculty of the Immaculate Heart of Mary Seminary at Bellefontaine, in Lenox. In 1972, he earned his Master of Arts degree in French at Immaculata College in Worcester. Father Tom then began studying for certification as a high school principal and supervisor at North Adams State College and was subsequently named principal of the seminary in 1969. He served in that position until 1979. Later that year, Father Tom enrolled in the Institute of Spirituality and Workshop at the Jesuit School of Theology in Berkeley, California. After a two-year update in spirituality and post-Vatican II theology, he joined the faculty of Saint Joseph Notre Dame High School in Alameda, California. In 1983, Father Tom was appointed the associate pastor of Saint Matthew's Parish in Houston, Texas. Father Tom joined the Mississippi community in 1986 when he was named pastor of Queen of Peace Parish in Olive Branch. Then, in 1993, he became the pastor of Saint James Parish, Corinth, and the sacramental minister of Saint Mary's in Iuka and Saint Francis in Booneville. After serving the faithful in that capacity for sixteen years, Father Tom retired to The Priests of the Sacred Heart retirement community in Pinellas Park, Florida where he most recently resided. In addition to his parents, and several nieces and nephews who died in infancy, Father Tom was preceded in death by his sisters, Dorothy Ann McLaughlin and Joan Ann Calore; brothers, Neil Burns and John Burns; and brothers-in-law, Robert Calore and Frank Eick. Father Tom will be greatly missed by his brother, Joseph J. and his wife, Jo Ann Burns, Wilkes-Barre; sisters, Carol Ann Eick, Wilkes-Barre, and Marie Ann and her husband, Kevin Mitchell, Harrisburg; brother-in-law, William McLaughlin, Endicott, New York; sister-in-law, Geraldine Burns, Scituate, Massachusetts; many nieces and nephews, former parishioners and other family and friends. Celebration of Father Tom’s life will begin Friday with visitation from 6 to 9 PM at McLaughlin’s, 142 South Washington Street in Wilkes-Barre and continue there on Saturday with gathering at 8:30 AM followed by a Funeral Mass at 9:30 AM in the Church of Saint Mary of the Immaculate Conception. Interment will be in Saint Mary’s Cemetery. Memories and condolences may be shared with Father Tom’s family at www.celebratehislife.com

The family of Father Thomas L. Burns SCJ created this Life Tributes page to make it easy to share your memories.