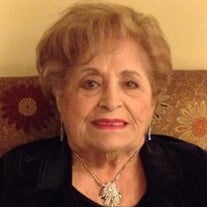 Theresa Charles Shiner, 93, of Hanover Township, passed away on Tuesday, June 30, 2020, at Mercy Center in Dallas. She was born in Wilkes-Barre on March 18, 1927 and was the daughter of Lebanese immigrants, the late Simon and Elizabeth Charles.... View Obituary & Service Information

The family of Theresa Shiner created this Life Tributes page to make it easy to share your memories.