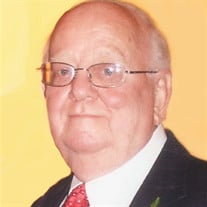 Theodore L. Zwiebel, 85, of Hanover Township passed away peacefully on Friday, April 26, 2019. Born June 26, 1933 in Wilkes-Barre he was a son of the late Theodore W. and Katherine Gwynn Zwiebel. Ted was a 1951 graduate of E.L. Meyers High School and continued his education at Wyoming Seminary and King's College. Ted proudly served our country as a Sergeant of the Army from 1953 to 1955. Ted joined his father in the operation of Holmes Metallic Company for many years and later worked for Shingle & Gibb in New Jersey before retiring. Ted was a longtime member of the Parish of Saint Therese where he was an Acolyte and was active in the Holy Name Society and Usher's Club. He also served as a board member for Saint Therese's Little League Baseball and coach for Saint Therese's Basketball League. He was a founding member and two-time president of the former Rotary Club of South Wilkes-Barre where he was the first member to receive the Paul Harris Fellow distinction. Ted married the love of his life, Catherine Moses, on November 30, 1957. Together they raised four children, and he was most proud of supporting each of them through their college education. Ted was preceded in death by infant sons, Patrick and Gerard, a sister, Dorothy Farrell and brothers, John and Robert. Ted will be greatly missed by his wife, Catherine; children, Theodore and his wife Peggy Zwiebel of Scranton, Michael J. and his wife Dina of Bel Air, Maryland, Christopher R. and his wife Denise Zwiebel of White Haven, and Laura A. and her husband Eric Swank of Leesburg, Virginia; grandchildren, Christopher, Kelly, Sarah, Jenna, Julie, Madeline, Nathan and Catherine; nieces, nephews, other family and friends. Celebration of Ted's Life will begin Sunday, April 28, 2019 with visitation from 5 to 8 PM at McLaughlin's, 142 South Washington Street in Wilkes-Barre and continue there on Monday with gathering at 8:30 AM followed by a Funeral Mass at 9:30 AM in the Church of Saint Mary of the Immaculate Conception. Interment with military honors will be in Saint Mary's Cemetery. In lieu of flowers, memorial donations may be made to Wilkes-Barre Rotary Charities Inc., 77 E. Market St, Wilkes-Barre, PA 18701, of the Church of Saint Mary of the Immaculate Conception. Memories and condolences may be shared with Ted's family at www.celebratehislife.com

Theodore L. Zwiebel, 85, of Hanover Township passed away peacefully on Friday, April 26, 2019. Born June 26, 1933 in Wilkes-Barre he was a son of the late Theodore W. and Katherine Gwynn Zwiebel. Ted was a 1951 graduate of E.L. Meyers High... View Obituary & Service Information

The family of Theodore L. Zwiebel created this Life Tributes page to make it easy to share your memories.