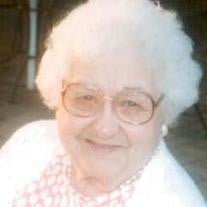 Rose T. Schwab, 102, of Wilkes-Barre passed into eternal life on Sunday evening, February 26, 2012 in Wilkes-Barre. Born March 23, 1909 in Scranton she was the youngest of eleven children of the late Frederick and Theressia Oswald Werner. A communicant at Saint Mary of the Assumption in Scranton, Rose was educated in the parish school and married her beloved husband, Leonard J. Schwab, on July 6, 1929. Upon her marriage, she moved to her husband’s hometown of Wilkes-Barre, and has been a resident of this city for eighty-three years. Rose’s faith in Jesus Christ sustained her throughout her lifetime. She was the oldest living member of the Parish of Saint Therese at the time of its closure. Her husband, Leonard J. Schwab died in 1981 and a son, Harry A. Schwab died in 2008. Sisters, Margaret Werner, Katherine Meyers Raebel, Theresa Byrne and Caroline Oddo, and brothers, Frederick, Oscar, Joseph, Herman, Ambrose and Edward Werner also preceded her in death. Rose will be missed by her loving son Leonard J. Schwab Jr. and his wife Margaret of Bethlehem, daughter Rosemary T. Schwab of Wilkes-Barre, and daughter-in-law Maria Schwab of Boston; grandchildren, Susan Schwab Powell and her husband Brian of Bethlehem, Jack Schwab and his wife Deborah of Bethlehem, Roseann T. Kebles and her husband George of Dallas, Kathryn L. Dale of Wilkes-Barre, Nicholas Schwab and his wife Kate of Vermont, and Joseph Schwab of Colorado; great-grandchildren, Thomas L. Dale, Cassandra Powell, Jason Schwab, Kyle Schwab, and Cole Kebles; a great-greatgranddaughter, Sophia Dale, who was a joy to her in her final year of life; and many nieces and nephews. Celebration of Rose’s Life will be held Wednesday at 8:30 AM from McLaughlin’s – The Family Funeral Service, 142 South Washington Street in Wilkes-Barre with Funeral Mass at 9:30 AM in the Church of Saint Nicholas. Interment will be in Saint Mary’s Cemetery in Hanover Township. Visitation will be held at McLaughlin’s on Tuesday from 6 to 8 PM. Permanent messages and memories can be shared with Rose’s family at www.celebrateherlife.com

Rose T. Schwab, 102, of Wilkes-Barre passed into eternal life on Sunday evening, February 26, 2012 in Wilkes-Barre. Born March 23, 1909 in Scranton she was the youngest of eleven children of the late Frederick and Theressia Oswald Werner. A... View Obituary & Service Information

The family of Rose Schwab created this Life Tributes page to make it easy to share your memories.