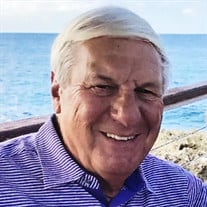 Robert Anthony Pomento of Bear Creek passed away on September 2, 2019 at age 73. Bob and his wife, Judy, proudly celebrated their 50th wedding anniversary on August 30th. Bob was the son of the late Gabriel and Florence Pomento of Downingtown. He was a graduate of Bishop Shanahan High School in Downingtown and King’s College in Wilkes-Barre. Bob joined the Army in 1968 and served as a Captain on active duty until 1972 when he transferred to the Army Reserve. He retired as a Lieutenant Colonel after twenty-seven years of service to our country. Bob was Executive Vice President of Hemmingway Development. He was honored to be a member of the Board of Directors of John Heinz Institute and an Off-Ice Official for the AHL Wilkes-Barre-Scranton Penguins. Throughout Bob’s life, family and faith were his centers. His beautiful smile was a window into his kind heart and compassionate spirit. Bob found great joy in spending time with his wife, children and grandchildren at the beach or “Pop’s Pool”. Bob will be greatly missed and remembered as a loving husband, father, grandfather, brother, and friend by his wife, the former Judy Kane; four children and spouses, Eileen and Matthew Feyrer of Harrisburg, Scott and Kathleen Pomento of Baltimore, MD, Elizabeth and Tim Benson of North Andover, MA and Robert Pomento of Duluth, GA; his six exceptional grandchildren, Gabriel, Sam, Benjamin, Gus, Annie and Jonathan; his sisters and brother, Shirley Schrader, Kathleen Dodd, Rosemarie Connelly, Lisa Beck and Brian Pomento; nieces, nephews, other family and friends. Celebration of Bob’s Life will begin Friday with visitation from 4 to 7 PM at McLaughlin’s, 142 South Washington Street in Wilkes-Barre and continue on Saturday in the Church of Saint Elizabeth in Bear Creek with gathering beginning at 9 AM followed by a Funeral Mass at 10 AM. Memorial donations may be made to John Heinz Institute. Memories and condolences may be shared with Bob’s family at www.celebratehislife.com

Robert Anthony Pomento of Bear Creek passed away on September 2, 2019 at age 73. Bob and his wife, Judy, proudly celebrated their 50th wedding anniversary on August 30th. Bob was the son of the late Gabriel and Florence Pomento of Downingtown.... View Obituary & Service Information

The family of Robert A. Pomento created this Life Tributes page to make it easy to share your memories.

Robert Anthony Pomento of Bear Creek passed away on September...