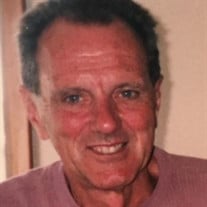 Robert A. Paoletti, 75, of Mountain Top lost his battle with cancer on August 18, 2018. Born October 2, 1942 in Shelburne Falls, Massachusetts he was a son of the late Antonio and Marion Coutu Paoletti. Bob earned a BS degree from the University of Massachusetts, Amherst in 1964 and a Ph.D from Johns Hopkins University in 1968. Upon completion of his doctorate he began his teaching career at King’s College in the Biology Department, retiring in May 2018. During his 49 year tenure at King’s he published articles and chapters in Biochemistry, Journal of Technical Writing and Communication, American Zoologist, Standards for Assessment in Higher Education, Bioscene: Journal of College Biology Teaching. He also received numerous institutional and regional awards and honors including: Max and Tillie Rosenn Award for Teaching Excellence, Board member of the year, Northeastern PA chapter, March of Dimes, Fr. Frank J. O’Hara Distinguished Service Professorship, and Professor of the Year, named by the Aquinas Society (King’s College academic honor society). He was a member of both Alpha Sigma Lambda and Delta Epsilon Sigma Honor Societies. Bob was the ultimate gardener as evidenced by the beauty of his yard. He spent countless hours working at his passion, and anyone who was able to see and enjoy it will attest his time was well spent. In addition to caring for his own yard, it was not unusual for him to put his gardening knowledge, along with a strong back, into helping family and friend with their yards. Without a doubt his greatest pleasure was being part of his children's and grandchildren’s lives, he was the consummate Nono and never missed an opportunity to spend whatever time he could with any, and all of his grandchildren. He will be greatly missed by his wife, Susan Warner Paoletti; children, Andrew and his wife Sirosh Paoletti of Saint Louis, Missouri, Anthony and his wife Jennifer Paoletti of Chicago, Illinois, Jill Zelinske McCormack of Mountain Top, and Mark and his wife Dawn Zelinske of Pottstown; grandchildren, Farzan and Hanann Paoletti, Dominic and Christopher Paoletti, Kyle and Nina McCormack, and Alex and Lauren Zelinske; sister, Toni Ann Paoletti of Keene, New Hampshire; aunts, uncle, other family and friends. Dr. Paoletti will undoubtedly be remembered by the many lives he enriched as an extraordinary teacher, mentor, colleague and friend. His was truly a life well spent. Bob's entire family is grateful for the care provided by the doctors, nurses and staff of Wilkes-Barre General Hospital. Celebration of Bob's Life will begin Friday, August 24, 2018 with visitation from 4 to 7 PM at McLaughlin's, 142 South Washington Street in Wilkes-Barre and continue on Saturday, August 25, 2018 with a Funeral Mass at 10 AM in the Church of Saint Jude in Mountain Top. Memorial donations, if preferred, may be made to Saint Joseph's Center in Scranton. Memories and condolences may be shared with Bob's family at www.celebratehislife.com

Robert A. Paoletti, 75, of Mountain Top lost his battle with cancer on August 18, 2018. Born October 2, 1942 in Shelburne Falls, Massachusetts he was a son of the late Antonio and Marion Coutu Paoletti. Bob earned a BS degree from the University... View Obituary & Service Information

The family of Robert A. Paoletti created this Life Tributes page to make it easy to share your memories.

Robert A. Paoletti, 75, of Mountain Top lost his battle with...