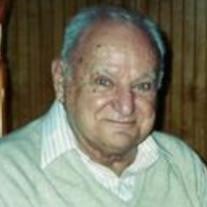 Robert E. Heck, 91, formerly of the East End section of Wilkes-Barre died Tuesday at Birchwood Nursing Center. Born November 30, 1919 in Wilkes-Barre he was a son of the late Jacob E. and Rhea George Heck. Bob was a graduate of Saint Nicholas High School. An Army Air Corps veteran of World War II, he served in Europe, Africa and the Middle East. Bob was a foreman for Somerville Construction Company, retiring after forty years with the company. He was most proud of his work in the restoration of Saint Peter's Cathedral in Scranton. Bob was proud of his children, grandchildren and great-grandchildren, and enjoyed travelling the East Coast to visit with them whenever he was able. Although his love affair never ended, after forty-three years of marriage he was preceded in death by his wife, the former Ellen Collins. Together they raised nine children. A granddaughter, Clare Heck and sisters, Betty Lisman and Marion Schappert also preceded him in death. Bob will be deeply missed by his children, Ellen Ann and her husband John Romanowski of Londonderry, New Hampshire, Robert E. and his wife Lisa Heck of Purcellville, Virginia, Barbara and her husband Ralph Evans of Ashley, Thomas and his wife Joy Heck of Orlando, Florida, Maureen and her husband James Beilman of Hawley, Michele and her husband Kevin Kane of Wilkes-Barre, Kathleen and her husband Joseph Adams of Wilkes-Barre, Rhea and her husband James Lambert of Brandon, Florida, and William and his wife Barbara Heck of Lawrenceville, Georgia; eighteen grandchildren; and three great-grandchildren. The entire family is grateful to the staff of Birchwood’s second floor for the kind and loving care given to Bob during his time there. A Blessing and Celebration of Bob’s Life will be led by Father Jack Lambert on Saturday at 10 AM at McLaughlin's Family Funeral Service, 142 South Washington Street in Wilkes-Barre. Interment will be in Saint Mary's Cemetery in Hanover Township. Visitation will be held at McLaughlin's on Friday from 4 to 7 PM and Saturday from 9 to 10 AM. Memorial donations are preferred and may be made to Wyoming Valley Children's Association, 1133 Wyoming Avenue, Forty Fort, 18704-4003. Permanent messages and memories can be shared with Bob’s family at www.celebratehislife.com

Robert E. Heck, 91, formerly of the East End section of Wilkes-Barre died Tuesday at Birchwood Nursing Center. Born November 30, 1919 in Wilkes-Barre he was a son of the late Jacob E. and Rhea George Heck. Bob was a graduate of Saint Nicholas... View Obituary & Service Information

The family of Robert Heck created this Life Tributes page to make it easy to share your memories.