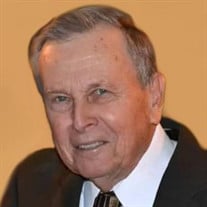 Robert J. Doran, 87, a life resident of Hanover Township passed away peacefully in the presence of his loving family at his home on Wednesday, December 8, 2021. Born March 10, 1934 in Hanover Township he was a son of the late Henry and Anna Sabalesky Doran. Robert was a graduate of Hanover High School. He earned his bachelor's degree from Wilkes University and master's degree from the University of Scranton. Robert was a Physics teacher at Hanover Area High School for thirty-three years before retiring in 1994. Robert was an avid New York Yankees and Notre Dame football fan. He enjoyed playing guitar and singing, coached his son, Joe, in little league baseball for several years, bowled with his brother, Jim, for fifty-three years, and enjoyed outings to the casinos. Most important to him was his family. He especially enjoyed watching his grandchildren grow up and being involved in their lives. He worked on Doran's Farm throughout his life. His son, Robert, died October 18, 2018. His sisters Margaret Krupinski and Anne Doran Smith also preceded him in death. His wife, the former Rose Testen, with whom he celebrated their 58th wedding anniversary in November; children, Susan and her husband Tony Clapps of South Carolina, Kathleen and her husband Tim Weyhenmeyer of Mountain Top, and Joseph and his wife Kristin Doran of Mountain Top; daughter-in-law, Donna Kajkowski Doran of New Jersey; grandchildren, Joshua, Justine, Kaitlyn, Owen, and Lizzie; brother, John and his wife Margaret Doran, and Jim and his wife Theresa Doran; sister, Jean Doran; nieces, nephews, other family, and friends will miss him very much. Celebration of Robert's Life begins Wednesday, December 15, 2021, with visitation from 5 to 8 PM at McLaughlin's, 142 South Washington Street in Wilkes-Barre. It continues there on Thursday, December 16, 2021 with gathering at 9 AM followed by a Funeral Mass at 10 AM in the Church of Saint Aloysius. Share memories and condolences with Robert's family at www.mjmclaughlin.com

Robert J. Doran, 87, a life resident of Hanover Township passed away peacefully in the presence of his loving family at his home on Wednesday, December 8, 2021. Born March 10, 1934 in Hanover Township he was a son of the late Henry and Anna... View Obituary & Service Information

The family of Robert J. Doran created this Life Tributes page to make it easy to share your memories.