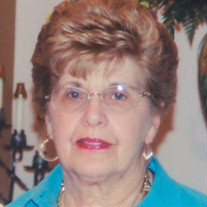 Rita B. Nardone, 86, of Wilkes-Barre, passed away June 22, 2017 surrounded by her family. Born on Sept. 16, 1930, Rita was the daughter of the late Valerio and Santina Zurla, of Exeter. She graduated top of her class in 1947 from Exeter High School. She was a devout Catholic and an active member of Saint Nicholas Church. Rita was married to the late Frank J. Nardone in 1954, and was a partner of Nardone Brothers Baking Co. Rita was preceded in death by her husband, Frank J. Nardone, in 1979; infant grandson, Frank III; three brothers, four sisters, and several sister and brother-in-laws, with whom she was very close. Rita will be greatly missed by her children, Frank Nardone and his wife, Kathy, of Plains; Cindy and her husband, Damir Medokavic, of California; Patricia and her husband, Ken Link, of New Jersey; Michael Nardone and his wife, Cheryl, of Mountain Top, and son, John Nardone and his wife, Kathryn Laughlin, of New Jersey; grandchildren, Christopher Eichele, Alexander, Alyssa and Ryan Link, Nicholas and Christopher Nardone, Michael Nardone, and Noah and Taylor Nardone. Rita’s family is grateful for her wonderful caregivers; Sandy, Andrea, Tami, Marissa, Muriel, Jeannie, Mary Ann and Maria, and are very appreciative of how well they treated her. Celebration of Rita’s Life will begin Sunday, June 25th with visitation from 3 to 6 PM at McLaughlin’s, 142 South Washington Street in Wilkes-Barre and continue there on Monday, June 26th with gathering at 10 AM followed by a Funeral Mass at 11 AM in the Church of Saint Nicholas. Interment will be in Saint Mary’s Cemetery. In lieu of flowers, donations in Rita's memory may be made to St. Nicholas Church Building Fund or the Catholic Youth Center. Memories and condolences may be shared with Rita’s family at www.celebrateherlife.com

Rita B. Nardone, 86, of Wilkes-Barre, passed away June 22, 2017 surrounded by her family. Born on Sept. 16, 1930, Rita was the daughter of the late Valerio and Santina Zurla, of Exeter. She graduated top of her class in 1947 from Exeter High... View Obituary & Service Information

The family of Rita Nardone created this Life Tributes page to make it easy to share your memories.