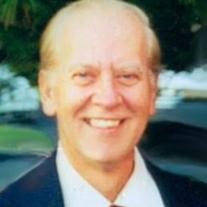 With his loving family at his side, Richard A. Sabulski, 64, of Sweet Valley was welcomed into eternal life by a brilliant sunrise on the morning of September 20th. He was born on February 27, 1948 in Wilkes-Barre and was the son of the late Anthony and Dorothy Fegal Sabulski. A graduate of G.A.R. Memorial High School, Richard continued his education at Luzerne County Community College and earned his baccalaureate degree from King's College. An avid outdoorsman and environmentalist, Richard greatly enjoyed hunting, fishing and nature walks. His love of the outdoors led him to a career with the Pennsylvania Department of Environmental Protection from which he later retired. Richard was a devoted husband and father, who was known for his words of wisdom, his practical knowledge and his sense of humor. He was a devout Christian and member of the Parish of Our Lady of Fatima. He drew great strength and comfort from his faith and sought to share that faith with others. To that end, he and his wife participated in the Rite of Christian Initiation of Adults program at the Church of Saint Mary’s of the Immaculate Conception, where he was a communicant. Richard was an inspiration to all who knew him as he bravely battled several serious health issues. Each time Richard succeeded in beating impossibly slim odds, he reaffirmed for others the belief in God, in miracles, and in love. He will be greatly missed by his wife, the former Marilyn Ransom; son, Jim and his fiancée Nancy Jacobs and their children, Sidney and Caleb of Wilkes-Barre; daughter, Lynn Sabulski of Wilkes-Barre; brother, Anthony and his wife Maria Sabulski of Fort Washington; sister, Marilyn Warrelman of Wilkes-Barre; nieces, nephews, cousins and friends. He will also be greatly missed by his best buddy, his miniature poodle, Lou. Celebration of Richard’s Life will be held Monday at 8:30 AM from McLaughlin’s – The Family Funeral Service, 142 South Washington Street in Wilkes-Barre with Funeral Mass at 9:30 AM in the Church of Saint Mary of the Immaculate Conception. Interment will be in Saint Mary's Cemetery in Hanover Township. Visitation will be held at McLaughlin's on Sunday from 5 to 8 PM. In lieu of flowers, please consider becoming an organ and/or tissue donor. For more information or to register online please visit www.donatelife-pa.org. Permanent messages and memories can be shared with Richard’s family at www.celebratehislife.com

With his loving family at his side, Richard A. Sabulski, 64, of Sweet Valley was welcomed into eternal life by a brilliant sunrise on the morning of September 20th. He was born on February 27, 1948 in Wilkes-Barre and was the son of the late... View Obituary & Service Information

The family of Richard Sabulski created this Life Tributes page to make it easy to share your memories.