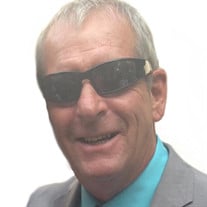 The world lost a wonderful husband, daddy, son and pocka on Friday January 20, 2017. Richard Lee Harris, son of Mildred Harris of Wilkes-Barre, passed away at Wilkes-Barre General Hospital surrounded by his family. Rick was a proud graduate of Meyers High School Class of 1966. He also graduated from Bloomsburg University in 1971 with a degree in Elementary Education. He spent his entire career teaching for Wilkes-Barre Area School District, retiring from Dan Flood Elementary in 2005. Rick was an avid football fan and could recall any score or stat you asked. He was a loyal fan of Penn State and the New York Giants. Rick was an enthusiastic golfer and member of Fox Hill Country Club and always looked forward to his foursomes with Jackie, Ray and Frank. Rick loved his family, vacationing at the beach, and his long walks around the neighborhood. He will be sorely missed by his family and friends. Rick is survived by the lights of his life, his wife, the former Mary Louise Kepics, with whom he celebrated twenty-seven years of marriage; his daughters, Kristy Piccolotti and husband Richard of White Haven, and Hillary Lee, at home. He is also survived by his precious little buddies whom he adored, his grandsons, Gianni Lee and Ginno Ricardo Piccolotti. He is also survived by his brother, David J. Harris and wife Gwynth of Plymouth and nieces, Meagan and Courtney, and great-nephews and great-niece. He was preceded in death by his father David E. Harris and sister, Ellen Harris. A very special thank you to Dr. Peter Andrews, Dr. David Greenwald, Dr. James Martino and Dr. Arthur Mitchell, as well as Five East nurses Alyssa and Mary, ICU nurses Kathy and Linda, and Clinical Director of Nursing, Mary Beth Angeli. Celebration of Rick’s Life will be held Wednesday January 25th with visitation beginning at 3PM and concluding with a blessing service at 6 PM at McLaughlin’s, 142 South Washington Street in Wilkes-Barre. Memories and condolences may be shared with Rick’s family at www.lifecelebrations.com

The family of Richard L. Harris created this Life Tributes page to make it easy to share your memories.

The world lost a wonderful husband, daddy, son and pocka on Friday...