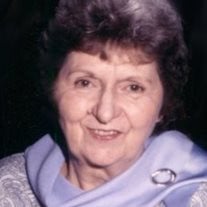 Regina Casey Purcell, 89, formerly of Stanley Street in Wilkes-Barre died Friday. Born January 13, 1925 in Ashley she was a daughter of the late Thomas and Catherine Grogan Casey. A 1942 graduate of Saint Leo’s High School in Ashley, Regina left for Baltimore where she worked in support of the manufacture of aircraft for the Glenn L. Martin Company during World War II. She later returned to Wilkes-Barre and worked for Bell Telephone Company prior to marriage. Regina was a member of the Parish of Our Lady of Fatima. Her husband of fifty-six years, Charles E. Purcell died September 5, 2005. A son, James died in 2004 and son-in-law, Donald Shutt died in 2006. Sisters, Aveline Halesey and Catherine Kennedy, and brothers, Thomas, Leonard, Gerald, Donald, James, Joseph, Leo and Patrick Casey also preceded her in death. She will be greatly missed by her children, Judy Shutt of Hanover Township, Charles and his wife Janet Purcell of Mountain Top, Michael and his wife Joanne Purcell of Trumbull, Connecticut, Shawn and his wife Joan Purcell of Slocum Township and Erin Purcell of Slocum Township; grandchildren, Jennifer, Daniel, Matthew D. and Donald Shutt, Christopher, Charles, III, Jessica, Andrea, Christine, Ashley and Casey Purcell, and Jaime Champagne; great-grandchildren, Matthew A. and Sophia Shutt, and Serena, Gabriel, Christian and Sophia Champagne; other family and friends. Regina’s entire family is grateful to the Carmelite Sisters and staff of Saint Therese Residence and Little Flower Manor for the loving care they shared through her final years. Celebration of Regina’s Life will begin Sunday with visitation from 4 to 7 PM at McLaughlin’s – The Family Funeral Service, 142 South Washington Street in Wilkes-Barre. Funeral Mass will be celebrated Monday at 9 AM in the Church of Saint Mary of the Immaculate Conception. Interment will be in Saint Mary's Cemetery in Hanover Township. Memorial donations are preferred and may be made to Little Flower Manor. Permanent messages and memories can be shared with Regina’s family at www.celebrateherlife.com

Regina Casey Purcell, 89, formerly of Stanley Street in Wilkes-Barre died Friday. Born January 13, 1925 in Ashley she was a daughter of the late Thomas and Catherine Grogan Casey. A 1942 graduate of Saint Leo&#8217;s High School in Ashley,... View Obituary & Service Information

The family of Regina Purcell created this Life Tributes page to make it easy to share your memories.