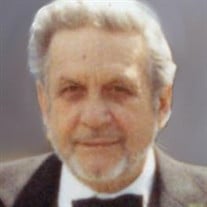 Raymond E. Sipple, 83, of Indian Lake in Buck Township died Friday at his home. Born December 19, 1931 in Wilkes-Barre he was a son of the late Henry L. and Grace Kastreva Sipple. A 1950 graduate of Wilkes-Barre Township High School, Ray completed business school in Missouri while he was serving with the military. A Veteran of the Korean Era, Ray served with the Air Force from 1951 to 1953. Ray was a superintendent for Sprague and Henwood for twenty-five years before founding Pocono Test Boring and Drilling in 1991. He remained active with the company through 2012. Ray was a member of the Parish of Saint Elizabeth in Bear Creek and its Knights of Columbus Council 10571. In his younger years he enjoyed hunting and traveled extensively while working throughout the east and midwest. Ray was active in local politics for many years and served as a Buck Township Supervisor for thirty-four years. His wife, Elizabeth Lippa Sipple died October 23, 2012. He will be greatly missed by his children, Raymond Sipple, Jr. and his wife Ann Marie, Frank Sipple and his wife Brenda, Ann Marie Brudnicki, James Sipple and his wife Denise, Kathleen Sipple and her partner Elsie, Joseph Sipple and his wife Ann; grandchildren, Raymond, III, Grace, Renee, Frank, Jr., Jacob, Erin, P.J., Holly, Melissa, Nicole, James, Jr., Matthew, Joseph, Jr., Brittany, Tyler and Amber; great-grandchildren, Raymond, IV, Cassie Sipple, Amy, Kylee, Aiden, Alexis, Ashli Nicole, Taylor Leigh, Megan, Raeonna, Daniel, Jr. and Rylee; sister, Bernice Gavlick and brothers, Robert and Donald Sipple; other family and friends. Celebration of Raymond’s Life will be held Tuesday at 9 AM from McLaughlin’s, 142 South Washington Street in Wilkes-Barre with Funeral Mass at 10 AM in the Church of Saint Elizabeth. Interment will be in Saint Mary's Cemetery. Visitation will be held at McLaughlin's on Monday from 4 to 8 PM. Permanent messages and memories can be shared with Ray’s family at www.lifecelebrations.com

The family of Raymond E. Sipple created this Life Tributes page to make it easy to share your memories.