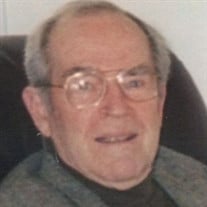 Philip L. Walsh, 86, of Wilkes-Barre died Friday, March 31, 2017. Born March 31, 1931 in Wilkes-Barre he was a son of the late Joseph M. and Agnes Gilligan Walsh. Phil was a graduate of Meyers High School, King’s College and the University of Scranton, and completed additional graduate level work at Penn State and Millersville Universities. He was drafted after graduating from King’s College in 1954 and spent two years in Germany. Phil’s teaching career began at the Luzerne County Industrial School for Boys at Kis-Lyn from 1956 to 1959. He taught and coached at Saint Mary’s High School in Wilkes-Barre from 1959 to 1961 and Pocono Catholic Mission School in Cresco from 1961 to 1963. After a one-year stint as a sales representative for REA Express he started his tenure with the City Schools in Wilkes-Barre in 1964. He was an administrator from 1967 until his retirement in 1993 as Principal of the Dr. David W. Kistler Elementary School. After retiring, Phil spent several years as Supervisor of Student Teachers at King's College. Phil was the state treasurer of the Pennsylvania Congress of School Administrators and was a basketball and football official on the high school, college and professional level from 1951 to 1972. He was also a member of the Municipal Authority of the City of Wilkes-Barre for ten years and a member of the Lehigh Sportsman’s Association. His brothers, Joe and Jim Walsh, and sister, Joan Walsh Goldman, preceded him in death. Phil will be greatly missed by his wife, Roz; sons, Michael and his wife Anje of Anchorage, Alaska, Alan of Panama City Beach, Florida, Philip M. and his wife Debra of Wilkes-Barre and Jeffrey J. of Forty Fort; grandchildren, Alyssa, Nicole, Jessica and Philip Walsh; sister, Phyllis and her husband Harry Powell of Wapwallopen; nieces, nephews, other family and friends. Phil’s entire family extends heartfelt appreciation for the loving and compassionate care shared with him by the healthcare professionals of Wilkes-Barre General Hospital and Riverstreet Manor, especially his many physicians, including Drs. Saidman, Citti, Adler, Parikh, Brown, Gerhart, Pernikoff, Verazin and Rittenberg, and their great staffs. Celebration of Phil’s Life will be held Monday with visitation beginning at 10 AM and followed by a Memorial Mass at 12 PM in the Immaculate Conception Church of Corpus Christi Parish, 605 Luzerne Avenue, West Pittston. Memorial donations are preferred and may be made to the Medical Oncology Associates Prescription Assistance Fund or the Osterhout Library. Memories and condolences may be shared with Phil’s family at www.celebratehislife.com

Philip L. Walsh, 86, of Wilkes-Barre died Friday, March 31, 2017. Born March 31, 1931 in Wilkes-Barre he was a son of the late Joseph M. and Agnes Gilligan Walsh. Phil was a graduate of Meyers High School, King&#8217;s College and the University... View Obituary & Service Information

The family of Philip L. Walsh created this Life Tributes page to make it easy to share your memories.