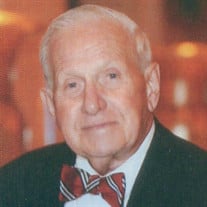 Honorable Peter Paul Olszewski, Sr., 90, of Wilkes-Barre, passed away in the presence of his loving family at Wilkes-Barre General Hospital on July 18, 2015. Judge Olszewski, Sr. was born to the late Alex and Sophia Olszewski of Plains on May 12, 1925. He was one of three brothers, including The Rev. Daniel David Olszewski and a twin brother, Paul Peter Olszewski, who passed away following service in the military in World War II. Judge Olszewski, Sr. attended Ss. Peter and Paul School in Plains, Plains High School, and Wyoming Seminary in Kingston. During WWII, Judge Olszewski, Sr. was engaged in active military duty serving with the United States Army in the China-Burma-India Theatre of Operations. He received numerous military decorations for his service, including Asiatic Pacific, American Theatre, Republic of China, and Good Conduct medals. His service-related activity continued with his involvement in the American Legion, the Veterans of Foreign Wars, and the China-Burma-India Veterans. Following the war, Judge Olszewski, Sr. attended Lafayette College in Easton, Pennsylvania from where he received his Bachelors degree in 1948. He then studied law at St. John’s University School of Law in New York, and was awarded his Juris Doctorate in 1952. Olszewski, Sr. became Attorney for the City of Wilkes-Barre from 1955-62, and organized the Redevelopment Authority and the Parking Authority (1957-67). He went on to serve as Attorney for Luzerne County, and was also involved in issuing a legal opinion approving the establishment of Luzerne County Community College. Olszewski, Sr. was elected Judge of the Court of Common Pleas of Luzerne County in 1967. During that time Judge Olszewski, Sr. had an excellent record as a trial judge on appeals to all the appellate courts of Pennsylvania. In 1983, Judge Olszewski, Sr. was elected to the Superior Court of Pennsylvania. He served on the Superior Court until 2005. In all, Judge Olszewski, Sr. served as judge of our state courts for 38 years. Over the course of his professional career, Judge Olszewski, Sr. served as an Instructor at King’s College, attended judicial seminars sponsored by the Appellate Judges Conference of the American Bar Association, National Conference of State Trial Judges, the Pennsylvania Conference of State Trial Judges, the Pennsylvania Bar Institute, American Trial lawyers, and other legal educational groups. He served as Vice President of the Pennsylvania Conference of State Trial Judges (1983-84); as a member of the Board of Trustees of College Misericordia, (now Misericordia University) and on the Board at the Wilkes-Barre campus of the Pennsylvania State University. He was active on the Interfaith Council of Wyoming Valley. He was an active member of the American Bar Association, Appellate Judges Conference, the Pennsylvania Bar Association, Philadelphia Bar Association, Wilkes-Barre Law and Library Association, and as a fellow of the American Bar Foundation. In 1968, Judge Olszewski, Sr. was one of a group of national judges selected to attend the National College of State Trial Judges in Nevada. In 1985, he served as a Faculty Advisor at the National Judicial College, also in Nevada. In 1990 and 1991 he was involved with the National College of Juvenile and Family Law at the University of Nevada. Judge Olszewski, Sr. was an Honorary Director of St. John’s University Law School Alumni Association and an Honorary Lifetime member of Frank Albert State Police Lodge. Judge Olszewski, Sr. was the recipient of many awards and recognitions including the Liberty Under Law Award, Fraternal Order of Eagles, the Distinguished Law and Justice Award of the Deputy Sheriffs’ Association of Pennsylvania, and the Distinguished Law and Justice Award of the County and State Detectives Association of Pennsylvania. Judge Olszewski, Sr. was a member of the Wyoming Valley Country Club for over sixty years and was recently awarded as an Honorary Lifetime Member. He was a long time member of the Westmoreland Club of Wilkes-Barre. He was also a member of the Wilkes-Barre and Plains American Legion and Veterans of Foreign Wars. Judge Olszewski, Sr. married the former June Marie Swantko of Nanticoke. Together they had four children. The Judge and his wife would have celebrated their 59th wedding anniversary on August 7th. In addition to his wife, he is survived by his son Honorable Peter Paul Olszewski Jr., (Ret.) and his wife Attorney Melissa Scartelli and daughter Rachel Olszewski; son Paul Peter Olszewski II and his wife Lisa and son Casey Olszewski; his son John Olszewski and wife Jaclyn and son Alec Olszewski; his daughter Mary Olszewski Hoda and husband Paul and children Aaron, Ethan and Hillary Hoda; and brother Reverend Daniel Olszewski. Celebration of Judge Olszewski’s Life will be held Thursday, July 23, 2015 with visitation beginning at 8:30 AM followed by a Funeral Mass at 10:30 AM in the Church of Saints Peter and Paul, 13 Hudson Road in Plains. Interment will be in the parish cemetery. In lieu of flowers, memorial donations may be made to the Parish of Ss. Peter and Paul, 13 Hudson Road, Plains Pa 18705, Volunteers in Medicine, 190 North Pennsylvania Avenue, Wilkes-Barre, 18701, or McGlynn Learning Center, 72 Midland Court, Wilkes-Barre, 18702 Memories and condolences may be shared with Judge Olszewski’s family at www.lifecelebrations.com

Honorable Peter Paul Olszewski, Sr., 90, of Wilkes-Barre, passed away in the presence of his loving family at Wilkes-Barre General Hospital on July 18, 2015. Judge Olszewski, Sr. was born to the late Alex and Sophia Olszewski of Plains on May... View Obituary & Service Information

The family of Hon. Peter Paul Olszewski Sr. created this Life Tributes page to make it easy to share your memories.