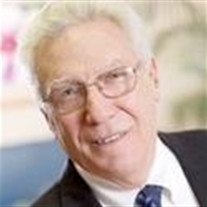 Peter J. Hoegen, 77, of Kingston Township died Wednesday, December 3rd at the home of his daughter, Katie Arensmeyer in Kingston. Born October 8, 1937 in St. Louis, Missouri he was a son of the late Judge Peter J. Hoegen and Rosemary Edam Hoegen. Peter was a 1955 graduate of Archbishop John Carroll High School in Washington, D.C. He attended Georgetown University, where he met his wife in 1958. He and the former Maureen McGovern of Jermyn were married on June 17, 1961 and they celebrated their fiftieth anniversary prior to her death on September 26, 2011. He served in the United States Army from 1960-1965, first as a Chief Warrant Officer in Washington, D.C. and was stationed in Munich, Germany from 1961-1965. After his military discharge, Peter was a special agent with the FBI from 1965-1968 when he enrolled at the Law School of the University of Notre Dame from which he graduated in 1971. Peter practiced law in the Wilkes-Barre area beginning in May of 1971 and later formed a partnership with his eldest son, Frank. He remained of counsel to the firm until his illness last year. Rev. Mr. Peter J. Hoegen was ordained a Deacon in the Diocese of Scranton in November of 1993. In September of 2013, a celebration was held to commemorate his 20th Diaconate Anniversary at Immaculate Conception Church of Corpus Christi Parish in West Pittston where he had served as a Deacon for the past four years. He will be greatly missed by his children, Frank and his wife Molly Hoegen of Kingston, Rose and her husband Joe Curtin of Richmond, Virginia, Katie and her husband Bob Arensmeyer of Kingston, Joe Hoegen of Mechanicsburg, Dan and his wife Amy Hoegen of Kingston Township; grandchildren, Kristin Curtin Sherrow of Portsmouth, Virginia, Joseph, Margaret, John Paul, Mary Clare and Peter Curtin of Richmond, Virginia, Sara Hoegen of Houston, Texas, Lael Hoegen of Philadelphia, Robert and Beth Arensmeyer of Kingston, Morgan Hoegen of Mechanicsburg, Jacob and Stephen Hoegen of Kingston Township; great-grandchildren, Michael, Caleb, Teagan and Tessa Sherrow; sisters, Kathy Dooley of Escondido, California and Margaret Mudd of Pacific Grove, California; nieces, nephews, other family and friends, including his best friend of twenty-five years, whom Peter referred to as “the best friend anyone could ever have”, Monsignor John J. Sempa. Peter’s entire family is grateful for the members of the Corpus Christi Parish Ministry and the devoted medical professionals who were active in his care at home during his illness, especially Dr. John Carey and Dr. Dave Mouallem, along with Susan, Barbara, Julie, Judy and Fran from Hospice of the Sacred Heart. Celebration of Peter’s Life will begin Friday with visitation from 4 to 7 PM at McLaughlin’s, 142 South Washington Street in Wilkes-Barre. Funeral Mass will be celebrated Saturday at 9:30 AM in the Church of Immaculate Conception, 605 Luzerne Avenue in West Pittston. In lieu of flowers, memorial contributions may be made to Medical Oncology Associates Prescription Assistance Fund, 382 Pierce Street, Kingston, 18704, St. Vincent De Paul Kitchen, Catholic Social Services, 33 East Northampton Street, Wilkes-Barre, 18701, or Corpus Christi Parish Social Concerns Ministry, 605 Luzerne Avenue, West Pittston, 18643. Permanent messages and memories can be shared with Peter’s family at www.lifecelebrations.com

The family of Peter J. Hoegen created this Life Tributes page to make it easy to share your memories.