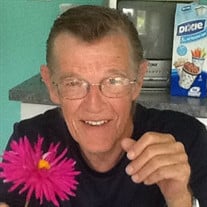 Paul McCarthy, 77, of Warrior Run died Wednesday at Celtic Hospice. Born November 17, 1936 in Allentown he was a son of the late David and Iris Howard McCarthy. A 1955 graduate of Thomas Jefferson High School in Elizabeth, New Jersey Paul honorably served our country with the Navy for two years. Paul was a manager for Gentech in Linden, New Jersey for many years before retiring. Paul enjoyed golf and bowling and was well liked for his witty and humorous personality. Brothers, David and Neal McCarthy preceded him in death. He will be greatly missed by his wife, the former Betty Richards; children, Maureen McCarthy Avery and her husband Jeff, Paul McCarthy and his wife Tracy, David McCarthy and his wife Dyan, and Sharon McCarthy; grandchildren, Julie, Jessica, Kelly, Laura, Jeffrey, Madison, Kaitlyn and David; brother, Robert McCarthy; sisters, Joanne Molle, Maureen Kwadecius, Ellen Dzmil, Sheila Manies and Kathleen McCarthy; nieces, nephews, other family and friends. Celebration of Paul’s Life will be held Saturday at 11:30 AM at McLaughlin’s – The Family Funeral Service, 142 South Washington Street in Wilkes-Barre. Interment will be in Hanover Cemetery. Visitation will be held at McLaughlin's on Friday from 5 to 8 PM. Permanent messages and memories can be shared with Paul’s family at www.celebratehislife.com

The family of Paul McCarthy created this Life Tributes page to make it easy to share your memories.