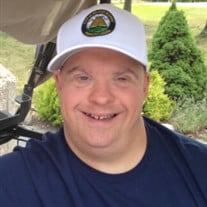 Patrick Joseph Leighton, Uncle Patrick, passed away peacefully at home surrounded by his mom and family on April 8, 2022. He was born February 12, 1969, to Ann Marie (Nancy) and the late Jack Leighton. Patrick and his mom shared their home with a loving mother-son relationship that was second to none. Patrick was a special person, not because of his Down syndrome or handicap, but because of his smiley personality, his genuine liking of everyone he met, and the number of friends he had. He had friends from many different generations and not an enemy, a claim few could make. He especially enjoyed attending sporting events over the years, watching his brothers, sister, nephews, nieces, and friends participate. He was a true sports fan, especially enjoying Notre Dame football, Philadelphia Eagles, and the Phillies. Patrick loved every family gathering, especially family weddings; always the first on the dance floor and the last to leave. He attended Mackin Elementary School, E. L. Meyers High School, graduating from Coughlin High School, Class of 1990. He received a standing ovation from his classmates while on stage to receive his diploma. Patrick joined the workforce following graduation working at URS, UCP, Keystone, and Creating Unlimited Possibilities (C.U.P.) until March 2020, when the pandemic closed his workplaces. Patrick was honored to be named the Grand Marshall of the City of Wilkes-Barre 2004 Saint Patrick’s Day Parade. He cherished this honor, participating each year as a past Grand Marshall, including this March in the 2022 parade. He was a former member of St. Therese’s Church, Wilkes-Barre until its closing and was, at the time of his passing, a member of St. Nicholas Church, Wilkes-Barre. He is survived and will be missed by his mother and best friend, Nancy, sister Patti and brother-in-law Bob, brother John and sister-in-law Ellie, brother Tom and sister-in law Patty, and brother Brian and sister-in-law Maura. He had many loving nieces and nephews, Kelly (Tim Smith), Tom Jr. (Maureen), Courtney (Tom Coyle), Lauren, Ashley, Brian Jr. and Jaclyn Leighton, and one great-nephew Keegan Smith. His aunt, Sister Thomas Mary Dougherty IHM and his uncle, Tom Dougherty, both of Dunmore, survive him as well. Patrick also leaves behind so many friends who became family and ultimately called him “Uncle Patrick”. Celebration of Patrick's Life will be in the Church of Saint Nicholas, 226 South Washington Street in Wilkes-Barre. Visitation is scheduled for 3 to 7 PM on Monday, April 11, 2022. A Funeral Mass will be celebrated at 10:30 AM on Tuesday, April 12, 2022. A Livestream will be available on the parish Facebook page: https://www.facebook.com/St.NicksChurchWB If you would like to wear green in his memory, feel free to do so. Patrick's family is grateful for all the people that touched his life in a special way. The love, friendship, kindness, and support that he received from several generations of friends is what made Patrick the special person that he was. Patrick returned that love and support in countless ways. In memory of Patrick, if you are having a bad day, or things are not going your way, think of Patrick with his big, bright smile, telling you that things will be all right. (Or listen to the Grease soundtrack). In Patrick’s life, no problem was too big to overcome. In lieu of flowers, donations to St. Josephs Center, 2010 Adams Ave., Scranton, PA. 18509, Sisters of IHM, 2300 Adams Ave., Scranton, PA. 18509, or Osterhout Free Library, 71 South Franklin Street, Wilkes-Barre, PA. 18701, will honor Patrick's memory. Share memories and condolences with Patrick's family at www.mjmclaughlin.com

Patrick Joseph Leighton, Uncle Patrick, passed away peacefully at home surrounded by his mom and family on April 8, 2022. He was born February 12, 1969, to Ann Marie (Nancy) and the late Jack Leighton. Patrick and his mom shared their home with... View Obituary & Service Information

The family of Patrick J. Leighton created this Life Tributes page to make it easy to share your memories.