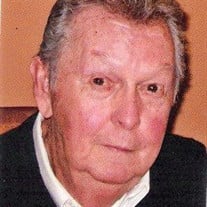 Patrick H. Boyle, 81, of Hanover Township entered eternal life on Thursday, November 12, 2015. Born June 30, 1934 in the Preston section of Hanover Township he was a son of the late John P. and Irene C. Butler Boyle. Patrick was a graduate of Hanover Township High School and a member of the US Naval Reserves. He earned his Realtors GRI designation through his studies at King's College. Patrick worked in Washington, D.C. in the Trust Department of Union Trust Bank and as an accountant for National Truck Leasing Company. When he returned to Wilkes-Barre he joined his father-in-law in the Pissott Boyle Agency, which later became the Boyle Insurance Agency, Inc., and was an independent insurance agent and broker for forty-four years before retiring on November 16, 2001. Patrick was a member of the Greater Wilkes-Barre Independent Agents Association, which he served as past president, and a member of the national and state associations. He was also a past president of the Lee Park PTA. The last survivor of seven children, he was preceded in death by his siblings, Mary Gorham, Rena Nolan, Bernard, John and Philip Boyle, and an infant sister, Catherine Boyle. Patrick will be greatly missed by his wife of sixty-one years, the former Mary R. Pissott; children, Patrick R. Boyle and his wife Cathy Ann, Bryan E. Boyle and his wife Catherine, Susan M. Sawka and her husband Michael and Linda C. Good and her husband Patrick; grandchildren, Ashlee Boyle Susko and her husband Chase, Cullen Boyle, Amanda Boyle and her partner Michael Santoli, Connor Boyle and his fiancée Caitlyn Moore, Brianna and Melina Good; great-grandchildren, Marina, Chance and Capria Susko; nieces, nephews, other family and friends. Celebration of Patrick’s Life will begin Sunday with visitation from 3 to 6 PM at McLaughlin’s, 142 South Washington Street in Wilkes-Barre and continue there on Monday with gathering at 10 AM followed by a Funeral Mass at 11 AM in the Church of Saint Leo the Great in Ashley. Interment will be in Saint Mary's Cemetery. Memorial donations may be made to the American Heart Association. Memories and condolences may be shared with Patrick’s family at www.lifecelebrations.com

Patrick H. Boyle, 81, of Hanover Township entered eternal life on Thursday, November 12, 2015. Born June 30, 1934 in the Preston section of Hanover Township he was a son of the late John P. and Irene C. Butler Boyle. Patrick was a graduate... View Obituary & Service Information

The family of Patrick H. Boyle created this Life Tributes page to make it easy to share your memories.