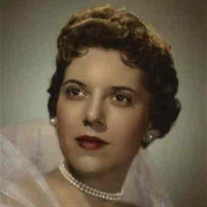 Patricia Gallagher, of Fayetteville, Georgia died at her home on August 13th. Born July 28, 1933 in Wilkes-Barre she was a daughter of the late John and Margaret Joyce Devers. She was a graduate of Saint Mary’s High School and Mercy Hospital School of Nursing. After graduation Patricia moved to New York where she was employed by the Bronx Veterans Hospital. Greatly missing home Patricia returned to Wilkes-Barre where she continued her nursing career at the Mercy Hospital. During that time Patricia also married her childhood sweetheart Charles Gallagher. This love was short lived upon Charles losing his life in a tragic automobile accident. After the death of her first husband she was employed as a nurse by the Wilkes-Barre Area school district and later by the Tri District Health Center on Washington St. Wilkes-Barre for 34 years until her retirement. At that time Patricia and her second husband the late Joseph Dombzalski moved to Fayetteville to be closer to family. Prior to leaving the area she had been a communicant at the Church of Saint Therese in Wilkes-Barre. In addition to her parents and husbands she was predeceased by a sister, Joyce Ichter. Patricia will be greatly missed by her sons, Christopher Gallagher with whom she resided and Charles Gallagher; sister, Jackie Cross of Georgia; other family and friends. Celebration of Patricia’s Life will begin Thursday with visitation from 4 to 6 PM at McLaughlin’s, 142 South Washington Street in Wilkes-Barre and continue there Friday with gathering at 8:30 AM followed by a Funeral Mass at 9:30 AM in the Church of Saint Nicholas. Interment will be in Saint Mary’s Cemetery. Memories and condolences may be shared with Patricia’s family at www.lifecelebrations.com

Patricia Gallagher, of Fayetteville, Georgia died at her home on August 13th. Born July 28, 1933 in Wilkes-Barre she was a daughter of the late John and Margaret Joyce Devers. She was a graduate of Saint Mary&#8217;s High School and Mercy... View Obituary & Service Information

The family of Patricia Gallagher created this Life Tributes page to make it easy to share your memories.

Patricia Gallagher, of Fayetteville, Georgia died at her home...