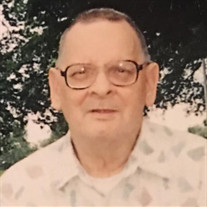 Norman F. Kopiak, 83, a longtime resident of Wilkes-Barre passed away following a lengthy illness on Thursday, March 28, 2019. Born May 30, 1935 in Kingston he was a son of the late Andrew and Helen Stochla Kopiak. Norman enlisted with the United States Air Force in 1952, beginning a thirty-year career in the military. He served in the Air Force, Navy and Army National Guard through the Korean Conflict and Vietnam Era before retiring as a Staff Sergeant in 1982. From 1983 to 1999 Norman was employed by the Social Security Administration. Norman was a member of the Parish of Our Lady of Hope. He traveled extensively throughout his military career. He enjoyed spending time with his wife, traveling, attending their grandchildren's school and sports events, and going out for dinner and ice cream. A brother, Thomas Kopiak, preceded him in death. On May 20, 1961, Norman was married to the love of his life, the former Margaret Bly; together they raised their family. He will also be greatly missed by his children; Margaret and her husband Paul Rose of Lake Silkworth, Norma and her husband Edward Prenga of Wilkes-Barre, Mary Ann and her husband Arthur Long of Wilkes-Barre, Frances Marie Warnagiris of Hunlock Creek, Norman and his wife Candace Kopiak of Parsons, Andrew Kopiak of Plains and Emily Kopiak of Wyoming; grandchildren, Pauline and Katie Rose, Justin Prenga, David, Charles and Arthur Long, Julia and 1LT Sarah Warnagiris, Christopher Kopiak, Ryleigh and Ryan Kopiak; brothers, Andrew and his wife Marie Kopiak of West Virginia and Jerry and his wife Mary Kopiak of Ohio; nieces, nephews, other family and friends. Celebration of Norman's Life will begin Monday with visitation from 5 to 8 PM at McLaughlin's, 142 South Washington Street in Wilkes-Barre and continue there on Tuesday with gathering beginning at 8:30 AM followed by a Funeral Mass at 10 AM in the Church of the Parish of Our Lady of Hope. Memorial donations are preferred and may be made to the American Heart Association. Memories and condolences may be shared with Norman's family at www.celebratehislife.com

Norman F. Kopiak, 83, a longtime resident of Wilkes-Barre passed away following a lengthy illness on Thursday, March 28, 2019. Born May 30, 1935 in Kingston he was a son of the late Andrew and Helen Stochla Kopiak. Norman enlisted with the... View Obituary & Service Information

The family of Norman F. Kopiak created this Life Tributes page to make it easy to share your memories.