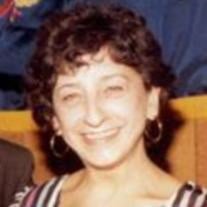 Miriam Thomas McGuire, 82, a former long time resident of Academy Street in Wilkes-Barre died Tuesday at Wilkes-Barre General Hospital. Over the last two-and-a-half years, she lived at the Tiffany Court Assisted Living Residence where she was described by her peers and the staff as being a selfless, loving, and caring friend to all. Born September 29, 1928 in Wilkes-Barre she was a daughter of the late Joseph and Rose Koury Thomas. A graduate of G.A.R. Memorial High School, Miriam was well liked and known for her larger-than-life personality. Miriam remained connected to her classmates through her organization and leadership in several class reunion gatherings over the years. Miriam was diversely involved in a variety of employment environments throughout her life. She worked in a hospital gift shop, as an elevator operator, made radio announcements, showed living spaces at the former Wilkeswood Apartments, greeted people at the cash register of a local retail store, and worked as a bank teller for many years. She liked being a jack-of-all-trades, which allowed her to thrive being surrounded by people. Miriam participated in the Women’s Auxiliary of the Wilkes-Barre Post Office. She was an avid and voracious reader. She loved spending time with her husband, children, and friends. Many described her as a wonderful and open-minded listener. Miriam was an amazing cook of both traditional meals and Lebanese food. She may just have fed all of Wilkes-Barre over the years at her dining room table on Academy Street. Her husband and dancing partner of almost fifty years, Eugene J. McGuire, died August 30, 2008. Five brothers: Tony, John, Eddie, Harry, and George, and three sisters: Alice, Sadie, and Peg also preceded her in death. She will be missed by her children, Molly and her husband Jerry Spanarkel of Belmar, New Jersey and Gene and his wife Kim, and their children, Shea, Allison, Drew and Chase McGuire of Lawrenceville, New Jersey; sister, Thelma and her husband Jerry King of Bensalem; cousins, nieces, nephews and many dear friends. Celebration of Miriam’s Life will be held Friday at 5 PM at McLaughlin’s Family Funeral Service, 142 South Washington Street in Wilkes-Barre. Visitation will be held at McLaughlin’s on Friday from 3 to 5 PM. Permanent messages and memories can be shared with Miriam’s family at www.celebrateherlife.com

Miriam Thomas McGuire, 82, a former long time resident of Academy Street in Wilkes-Barre died Tuesday at Wilkes-Barre General Hospital. Over the last two-and-a-half years, she lived at the Tiffany Court Assisted Living Residence where she was... View Obituary & Service Information

The family of Miriam Thomas McGuire created this Life Tributes page to make it easy to share your memories.