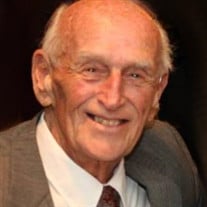 Michael G. Koval of Wilkes-Barre died Wednesday, November 19, 2014. Born October 14, 1927 in Swoyersville he was a son of the late Michael and Anna Koval. As a youth, Mike worked for the Duplan Corporation. After military service in the U.S. Navy, he worked for Ballantine Brewery in New Jersey. Upon his return to Pennsylvania, Mike was employed as a supervisor by the American Cigar Corporation in Pittston and Berwick. Following that employment he worked for the Singer Sewing Machine Company in Edwardsville and managed a Singer store in New York. His final employment was as a sales manager with Sears Roebuck Co. at the Wyoming Valley Mall, retiring after twenty-five years with the company. He then worked part time for Bath Fitter at the Home Town Market and at the Wyoming Valley Mall. Lastly he worked at the Kingston Active Adult Center as a Senior Aide. For many years Mike coached with the Wilkes-Barre Girls Softball League. He was an avid bowler, hunter and fisherman. He was a member and served as President of the Blue Ridge Gun Club, Swoyersville. In his later years, Mike loved the game of golf and spent several winter seasons in Florida enjoying the sport. Mike was a member of the Parish of Saint Nicholas in Wilkes-Barre and Our Lady of Czestochowa Assembly, Fourth Degree, Knights of Columbus Assumpta Council 1928 in Luzerne. His daughter, Genna Koval Kundratic died November 17, 2013. Brothers, John and Joseph Koval and a sister, Sr. Mary Davidica Koval, SSCM also preceded him in death. He will be greatly missed by his wife of fifty-six years, Margaret McAdara Koval; son, Michael J. Koval of Orange, California; daughters, Maureen Oremus of Franklin Township, Leah Kendra and Claire Wert of Wilkes-Barre; ten much loved grandchildren, Holly and Grace Koval, Julia Kundratic, Amy, David and Matthew Wert, Michael and Alex Kendra, and Lindsey and Riley Oremus; sister, Mary Theresa Pitcavage; nieces, nephews, other family and friends. These words best describe Mike as his family best remembers him: If these walls could talk, they would speak of a man, who has worked with great heart to accomplish his plan. They'd speak of the times that he's prayed in the night, for the strength to go on and to do what is right. They'd speak of sweet moments of laughter and fun, the time with his children, his love for each one. Oh, if they could talk, it would just be the start, of a story of love, a great man and his heart. Celebration of Mike’s Life will be held Saturday at 8:30 AM from McLaughlin’s, 142 South Washington Street in Wilkes-Barre with Funeral Mass at 9:30 AM in the Church of Saint Nicholas. Entombment will be in Saint Mary's Mausoleum. Visitation will be held at McLaughlin's on Friday from 5 to 8 PM. Permanent messages and memories can be shared with Mike’s family at www.lifecelebrations.com

Michael G. Koval of Wilkes-Barre died Wednesday, November 19, 2014. Born October 14, 1927 in Swoyersville he was a son of the late Michael and Anna Koval. As a youth, Mike worked for the Duplan Corporation. After military service in the U.S.... View Obituary & Service Information

The family of Michael G. Koval created this Life Tributes page to make it easy to share your memories.