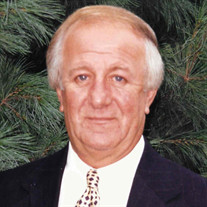 Veteran area broadcaster Mike Kaye, 81, of the Parsons section of Wilkes-Barre passed away in the presence of his loving family at Geisinger Wyoming Valley Medical Center on November 19, 2021. Born February 13, 1940 in Wilkes-Barre he was a son of the late John and Helen Kozemko. Mike lived a long and productive life and will be remembered for his great sense of humor and his zest for life. He was proud of his children and grandchildren and all that they achieved. He attended all their baseball, football, and soccer games, wrestling meets, and cheerleading and gymnastics competitions. Mike graduated from Coughlin High School, Class of 1958. As a senior in high school, he was selected as one of the top five athletes in the school, and a top pole vaulter in the area. In football, he was nominated for All-State honors and played in the UNICO game. In wrestling, he won the city district title as the team captain and captained the track team. After three years in the US Army, he decided to make a career in the broadcasting field and landed a job in radio as a sportscaster. To most, he is known for describing the action. He did the play-by-play for high school and college sports for radio stations WILK, WBAX, WNAK, and WARM for more than thirty years. He was selected as best play-by-play announcer in the state by the Radio Broadcasters Association of Pennsylvania and named best sportscaster in the state by the Associated Press. Mike received a meritorious award for outstanding public service presented by District 2 in 1979, was cited for twenty-five years of public service to the youth of Wyoming Valley by the Wyoming Valley Football Conference in 1990, and received the James McCarthy Memorial Media Award presented by the Killer Bees Athletic Club in 1991 for an outstanding career spanning twenty-six years. He was active on the youth sports scene and founded the Wyoming Valley Junior Football Conference. Mike was inducted into the Luzerne County Sports Hall of Fame in 1996. Mike raised money for the area Big Brothers/Big Sisters program, Saint Michael's School for Boys, local mentally challenged, and the elderly. He was the voice describing the circus acts for the blind at the Kingston Armory. His brothers, John, Charlie, and Joe (Buddy); and sisters, Irene Knorr, Dorothy Ward, and Lorraine Delgaudio, preceded him in death. His wife, the former Dorothy Faymore; sons, Michael, Jr. of White Haven, and Mark and his wife Jenny of Florida; brother, Robert and his wife Carol of Georgia; sister, Helen Costello; grandchildren, Mark, Jr. of Tennesee, Ryan of Georgia, and Grace, Gage, and Gabrielle of White Haven; nieces, nephews, other family, and friends will miss him very much. Mike's family will celebrate his life privately. Share memories and condolences with Mike's family at www.mjmclaughlin.com

Veteran area broadcaster Mike Kaye, 81, of the Parsons section of Wilkes-Barre passed away in the presence of his loving family at Geisinger Wyoming Valley Medical Center on November 19, 2021. Born February 13, 1940 in Wilkes-Barre he was a... View Obituary & Service Information

The family of Michael J. Kaye created this Life Tributes page to make it easy to share your memories.