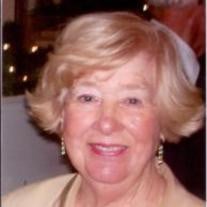 Mercedes J. Leighton, proud mother, grandmother, great-grandmother, and former Wilkes-Barre City Controller passed away peacefully on Friday, August 17, 2012 at the age of 90. The daughter of Martin and Anna Helfrich Toole, of Wilkes-Barre, she and her twin brother were the youngest of six siblings. Mercedes was a graduate of Coughlin High School and Wyoming Seminary Business School. For several years, she worked as the Manager for the Osterhout Library North Branch on George Avenue, Wilkes-Barre and as a librarian aid for the Wilkes-Barre Area School District at the Hoyt Street School and Kistler Elementary. On June 8, 1946, she married Carl A. Leighton, Jr., and together they reared three children, Cal, Joan and Kathy. In April, 1978, her husband, Carl, who was the Wilkes-Barre City Controller, unexpectedly passed away and Wilkes-Barre City Council nominated and appointed her to fulfill his unexpired term. To the surprise of many, Mercedes decided to run for the seat herself in 1979, and was elected City Controller that year, and won four consecutive terms for a total of 21 and one-half years in office. In addition to her work as an elected official, during which she worked with four mayoral administrations, Mercedes has a life-long resume of being an active volunteer for St. Therese’s Church in South Wilkes-Barre, King’s College Century Club, the Osterhout Library, Little Flower Manor, College Misericordia, the American Red Cross, Women of the Rotary, the Elks, St. Mary’s School, the C.Y.C., Scranton Prep, St. Ann’s Academy, the Heart Association Drive, the Wilkes-Barre Chamber of Business and Industry Visitation Committee and Meals on Wheels. Her public service did not end with her position as City Controller. During her tenure, she was the vice-chair of the Luzerne County Democratic Party, the Chair of the Wilkes-Barre Democratic Club, a member of Governor Robert P. Casey’s Finance Committee, a member of the Fireman’s Pension Board, the Fireman’s Relief Pension Board, the Policemen’s Relief Pension Board, Non-Uniform Employees Pension Board, the City’s Aggregate Board, and was the Treasurer of the Pennsylvania State Controller’s Association, where she served three terms. One of her highest recognitions was her appointment by Governor Casey to serve on the Pennsylvania Public Utility Commission. She was preceded in death by her husband, Carl, and her twin brother Martin, as well as sisters Marion Gallagher, Margaret O’Malley, Florence Saricks and Arlene Dunn. She is survived by her son Carl A. (“Cal”) Leighton, III and his wife, Ann Marie (Brady), of King of Prussia, and daughters Mercedes Joan Vinsko and her husband, William Vinsko, Sr., of Wilkes-Barre, and Kathleen Drosey, and her husband Attorney Victor Drosey, of Hanover Township. She was extremely proud of her grandchildren, Carl A. Leighton, IV, Katie Leighton Miranda, Attorney William Vinsko, Jr., Kevin Leighton, Attorney Brian Vinsko, Carolyn Drosey and Kathleen Drosey. Mercedes absolutely loved her great-grandchildren, Brett, Jared, Mercedes, Will, Margaret, Giselle, Ryan, Carolina, Charlie, Cal, GiGi, Kevin, Jr. and step-great-granddaughter, Kristen Miranda. Funeral will be held Monday, August 20 at 8:30 AM from McLaughlin’s – The Family Funeral Service, 142 South Washington Street, Wilkes-Barre, with a funeral mass at 9:30 AM from St. Nicholas Church, South Washington Street, Wilkes-Barre. Internment will be in St. Mary’s Cemetery in Hanover Township. Visitation will be held at McLaughlin’s on Sunday from 4 to 8 PM. In lieu of flowers, please make donations to King’s College, Osterhout Library or Little Flower Manor, because those are three places that were really close to her heart. Permanent messages and memories can be shared with Mercedes’s family at www.celebrateherlife.com

The family of Mercedes J. Leighton created this Life Tributes page to make it easy to share your memories.