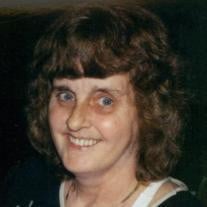 Maureen Mullen Cook, 61, a resident of Kingston, passed away Monday, November 1, at Hospice Community Care in Wilkes-Barre, following an illness. Born and raised in Wilkes-Barre, she was a daughter of Irene Norton Mullen and the late Dennis A. Mullen. Maureen married Stephen J. Cook in 1971 and on October 29th they observed their 39th wedding anniversary. Together they raised two sons, Stephen and Dennis, with whom she shared her belief in the importance of hard work and her deep love of family. She was, for many years, an active member of Holy Trinity Parish in Wilkes-Barre. Maureen was employed by Sugerman’s of Wilkes-Barre from the time it opened until the day it closed, ably managing several departments of the store. She was subsequently employed by Service Merchandise in Wilkes-Barre. Maureen taught us new definitions of the words: friendship, dependability, dedication, responsibility, and integrity. For her, it wasn't about what you want to do in life; it was about what you have to do, such as: taking Stephen and Dennis to countless activities and sporting events; helping raise Katie, John, and Jim; working at Sugerman’s when times got tough so Stephen could go to college; spending two weeks at the hospital with Jeannie when Charlie was dying and never leaving her side; and going to the nursing home to spend time with Nan, every day! The list goes on and on and on... all of this with numerous health issues and never a single complaint. Maureen was selfless on a level most of us can only hope to achieve. For those of us still here we can only strive to be more like her and I suspect to find out we shall only fall short. We shall miss you more than you know! A brother, Robert Mullen preceded her in death. In addition to her mother and husband, Maureen is survived by sons, Stephen Cook and his wife Lauralie, and Dennis Cook; granddaughter, Ali Cook and grandson, J.P. Cook; sisters, Judy Mullen and Ann Breymeier and her husband Mark, and a nephew, Noah Breymeier. Our entire family is grateful for the kindness and support provided by the staff of Hospice Community Care. Maureen’s Life will be Celebrated in a Funeral Mass on Friday at 9:30 AM in Saint Mary of the Immaculate Conception Church, 134 South Washington Street in Wilkes-Barre. Visitation will be held Thursday from 5 to 8 PM at McLaughlin’s Family Funeral Service, 142 South Washington Street in Wilkes-Barre. ¬¬¬¬¬¬¬¬¬¬¬¬¬¬¬¬¬¬¬¬¬¬¬¬¬¬¬¬¬ Memorial contributions are preferred and may be made to Hospice Community Care, 601 Wyoming Avenue, Kingston, PA 18704, or the SPCA of Luzerne County, 524 East Main Street, Wilkes-Barre, PA 18702

Maureen Mullen Cook, 61, a resident of Kingston, passed away Monday, November 1, at Hospice Community Care in Wilkes-Barre, following an illness. Born and raised in Wilkes-Barre, she was a daughter of Irene Norton Mullen and the late Dennis... View Obituary & Service Information

The family of Maureen Cook created this Life Tributes page to make it easy to share your memories.

Maureen Mullen Cook, 61, a resident of Kingston, passed away...