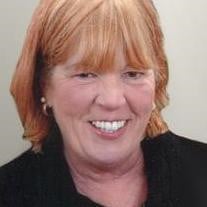 Mary Elizabeth Williams was accepted into the arms of the Lord on Thursday, December 13, 2012. An affectionate wife, mother, sister, daughter, and friend, Mary Elizabeth was loved dearly and will be missed greatly. Born May 25, 1954 to the late Thomas and Betty Gardner Collins, Liz was a lifelong resident of Wilkes-Barre. A 1972 graduate of Elmer L. Meyers High School, she was an accomplished swimmer and majorette during her high school years. Liz and her husband, Edward, were married on August 24, 1975. She worked in various positions in the health care field throughout her career, most recently with the Geisinger Health System. A sister, Margie, preceded her in death. In addition to her husband, Edward Sr., surviving are her two sons, Edward, Jr. and his wife Lisa Charneski of Philadelphia, and Michael and his wife, Julie of Washington, D.C.; two grandchildren, Matthan Edward and Margaret Zoe; sisters, Mary Patricia Pearce of Kingston and Molly Ellen Coolbaugh of Wilkes-Barre; nieces and nephews. Liz was supremely devoted to the people she loved. Her unyielding sense of compassion and commitment to her family and friends will be her legacy. Her dedication to her children will be felt for years to come. Celebration of Liz’s Life will be held Saturday at 12:30 PM from McLaughlin’s – The Family Funeral Service, 142 South Washington Street in Wilkes-Barre with a Funeral Mass at 1:30 PM in the Church of Saint Nicholas. Interment will be in Saint Mary’s Cemetery in Hanover Township. Visitation will be held at McLaughlin’s on Friday from 5 to 8 PM. Memorial donations are preferred and may be made to Saint Vincent DePaul Kitchen, 39 East Jackson Street, Wilkes-Barre, 18701-2709. Permanent messages and memories can be shared with Liz’s family at www.celebrateherlife.com

Mary Elizabeth Williams was accepted into the arms of the Lord on Thursday, December 13, 2012. An affectionate wife, mother, sister, daughter, and friend, Mary Elizabeth was loved dearly and will be missed greatly. Born May 25, 1954 to the... View Obituary & Service Information

The family of Mary Elizabeth Williams created this Life Tributes page to make it easy to share your memories.

Mary Elizabeth Williams was accepted into the arms of the Lord...