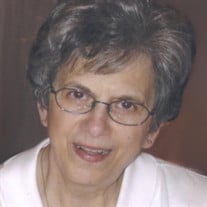 Mary A. Grogan of Wilkes-Barre passed away May 13, 2015 at Manor Care in Kingston. Born February 3, 1935 in Pittston she was a daughter of the late Peter and Minnie Daley DeMartini. A 1953 graduate of West Pittston High School, Mary looked forward to the monthly meetings with her friends and fellow classmates. Mary served our country honorably as a veteran of the United States Navy. Mary worked for Bell Telephone in Philadelphia and Wilkes-Barre. Prior to retiring, she was an administrative assistant for many years at First Eastern and later PNC Bank. Mary was a compassionate, caring person and a devout Catholic who taught CCD classes for many years at the Church of Saint Aloysius in Wilkes-Barre. She was a past secretary of the Wilkes-Barre City Taxpayers Association and a member of the Luzerne County Public Forum. Family was most important to Mary and she always had a kind word for everyone. She was preceded in death by a daughter-in-law, Jane Grogan. Mary will be greatly missed by her husband, Francis, with whom she celebrated their 59th anniversary on May 4th; son, David and his wife Linda Grogan of Exeter; stepson, William Grogan; granddaughter, Tracy Grogan and her husband Kevin Spector; sister, Phyllis DeMartini Watson and husband William of West Pittston; nephews, Michael Watson and his wife Shannon of Arlington, Virginia and Paul Watson of West Pittston; niece, Debbie Watson of West Pittston; great-nieces and –nephews, Michael and Meghan Watson, Tayler, Caitlin and Lauren Bernoskie; aunt, Ethel Delia; and her special friend and cousin Antoinette Galle. Mary had a large, loving family with many more nieces and nephews, cousins, in-laws and friends. Celebration of Mary’s Life will be held Saturday, May 30, 2015 with a Funeral Mass at 10 AM in the Church of Saint Aloysius, Barney and Division Streets in Wilkes-Barre. McLaughlin’s is assisting Mary’s family with arrangements. Memories and condolences may be shared with Mary’s family at www.lifecelebrations.com

Mary A. Grogan of Wilkes-Barre passed away May 13, 2015 at Manor Care in Kingston. Born February 3, 1935 in Pittston she was a daughter of the late Peter and Minnie Daley DeMartini. A 1953 graduate of West Pittston High School, Mary looked... View Obituary & Service Information

The family of Mary A. Grogan created this Life Tributes page to make it easy to share your memories.