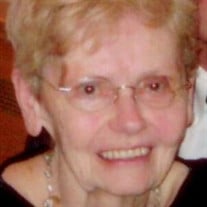 Mary Devaney Cavanaugh, 89, passed away February 21st at her daughter's home in Wilmington, Delaware. Born February 27, 1928 in Wilkes-Barre, Mary was a daughter of the late Edward and Helen Devaney and was a proud resident of Wilkes-Barre until recently. She was preceded in death by her husband, Eugene C. Cavanaugh, her brother Thomas Devaney, and sister Jeanne Devaney, RSM. Mary graduated from St Mary's High School, class of 1946, and worked in various positions in the local business community throughout her career. Mary enjoyed her many years at the Wilkes-Barre Times Leader where she served in several roles, including the publisher's Executive Secretary and as an accomplished advertising salesperson. She relished the outdoors, political discussions, keeping up with her children's activities, and reading the New York Times. Mary will be greatly missed by her daughter, Anne Cavanaugh of Wilmington; sons, Matthew Cavanaugh of Long Beach, CA and Eugene and his wife Lori of West Hartford, CT; grandchildren, Sam Cavanaugh, Alex Cavanaugh and Selina Dacey and her husband Chris Dacey; great-granddaughter, Cora Dacey; sisters, Eileen Devaney of Wilkes-Barre, Joan Finn of Woodbridge, VA and Anne Devaney, RSM of Oakland, CA; as well as many beloved nieces and nephews. Celebration of Mary's Life will begin Sunday with visitation from 4 to 7 PM at McLaughlin's, 142 South Washington Street in Wilkes-Barre and continue there on Monday with gathering at 8:30 AM followed by a Funeral Mass at 9:30 AM in the Church of Saint Mary of the Immaculate Conception. Interment will be in Saint Nicholas Cemetery in Shavertown. Donations in Mary's memory may be made to the Osterhout Free Library, 71 South Franklin St., Wilkes-Barre PA 18701. Memories and condolences may be shared with Mary's family at www.celebrateherlife.com

Mary Devaney Cavanaugh, 89, passed away February 21st at her daughter's home in Wilmington, Delaware. Born February 27, 1928 in Wilkes-Barre, Mary was a daughter of the late Edward and Helen Devaney and was a proud resident of Wilkes-Barre... View Obituary & Service Information

The family of Mary Devaney Cavanaugh created this Life Tributes page to make it easy to share your memories.

Mary Devaney Cavanaugh, 89, passed away February 21st at her...