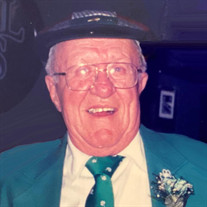 Martin A. Lenahan, known to many as Shingles or Buddy, 91, of Kingston, passed away peacefully in the presence of his loving family on Sunday, July 4, 2021. Born October 1, 1929 in Sugar Notch he was a son of the late Martin and Julia Kane Lenahan. Martin was a graduate of Saint Mary's High School. He served our country as a soldier of the Army during the Korean War. Shingles started his career in printing with the former Sunday Independent and International Color Press before taking a position with The Tampa Tribune. He later moved to Philadelphia, where he developed his love of the Eagles and Phillies while working for the Philadelphia Bulletin. Returning to the Wyoming Valley, he was an agent for Peoples Life Insurance Company and worked for the City of Wilkes-Barre before retiring. Shingles was an enthusiastic fan of Notre Dame Football, attending South Bend and Ireland games through the years. A longtime member of the Ancient Order of Hibernians, he was honored to be named Grand Marshal of the 2005 Wilkes-Barre Saint Patrick's Day Parade. His wife, Martha Saraka Lenahan, died on October 21, 2018. A sister, Theresa, and her husband, Dan Lynch, also preceded him in death. His daughters, Martina and Colleen and her husband Vince Sperduto; grandchildren, Patrick and his wife Alex Lenahan, and Amanda and Vincent Sperduto; his four-legged buddies, Ruby, Oliver, and Reese; nieces, nephews, other family and friends will miss him much. Celebration of Martin's Life begins Wednesday, July 7th with visitation from 4 to 6 PM at McLaughlin's, 142 South Washington Street in Wilkes-Barre and continues there on Thursday with gathering at 8:30 AM followed by a Funeral Mass at 9:30 AM in the Church of Saint Mary of the Immaculate Conception. Donations to True Friends Animal Welfare: www.truefriendsawc.com, or Laura's Hope Rescue: www.laurashoperescue.com in memory of Martin are preferred. Share memories and condolences with Martin's family at www.mjmclaughlin.com

Martin A. Lenahan, known to many as Shingles or Buddy, 91, of Kingston, passed away peacefully in the presence of his loving family on Sunday, July 4, 2021. Born October 1, 1929 in Sugar Notch he was a son of the late Martin and Julia Kane... View Obituary & Service Information

The family of Martin A. Lenahan created this Life Tributes page to make it easy to share your memories.