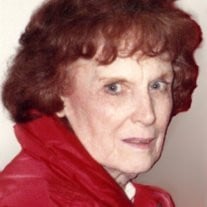 With family at her side, Marion Ransom, 90, was called home on Tuesday, September 17. Marion was a lifelong resident of Wilkes-Barre and attended Saint Mary’s Church of the Immaculate Conception. She was employed for many years in the garment industry, but later returned to the school district that educated her as a food service employee at the Heights-Murray Elementary School, from which she eventually retired. Marion loved music and during WWII was known to sing for live local radio broadcasts. She was also an excellent jitterbug dancer. Marion’s home was a gathering place for family and friends, who frequently - and enviously - teased her about her immaculately clean and organized home. She was generous and hospitable to all who entered, offering cookies and a cup of her famous “extra-super-strength” coffee. Marion is best known for her work ethic, her unwavering faith, and her adoration and enduring love of children. During the years of the Great Depression, Marion and her mother Nellie operated a Charity Home from their residence. This dwelling gave those children who otherwise would not have had it, the experience of growing up surrounded by the love of a family. During its operation, more than 400 children found temporary residence there, some for many years. The home became known by some in the neighborhood as the House of Angels. After its closing, Marion and Nellie continued to live there, and often received thank you letters and gifts from adults who had fond memories of the time they spent there as children. Marion was preceded in death by her parents, Elwood and Nellie Hall, her brother, Elwood (Sparky) Hall Jr., and grandson, Sean Ransom. She will be greatly missed by her daughter, Marilyn Sabulski of Sweet Valley, son, William Ransom Sr. of Wilkes-Barre; grandchildren: James Sabulski of Wilkes-Barre, Lynn Sabulski of New York, NY, Donna Ann Redenski of Nanticoke, Kathleen Ransom of Shenandoah, William Ransom Jr. of Port Charlotte, FL, Kevin Ransom of Wilkes-Barre, Christopher Ransom of Kingston; fourteen great-grandchildren, and five great-great grandchildren, all of whom she was very proud. Marion’s family is grateful to the compassionate employees of both Golden Living Center – Summit and Asera Care Hospice for their devotion and the outstanding care they provided to her. Celebration of Marion’s Life will be held Saturday at 8:30 AM from McLaughlin’s – The Family Funeral Service, 142 South Washington Street in Wilkes-Barre with Funeral Mass at 9 AM in the Church of Saint Mary of the Immaculate Conception. Interment will be in Saint Mary’s Cemetery in Hanover Township. Visitation will be held at McLaughlin’s on Friday from 5 to 8 PM. In keeping with Marion’s lifelong commitment to helping children, in lieu of flowers, donations can be made to the St. Jude’s Children’s Hospital, www.stjude.org, or to any organization that benefits children. Permanent messages and memories can be shared with Marion’s family at www.celebrateherlife.com

With family at her side, Marion Ransom, 90, was called home on Tuesday, September 17. Marion was a lifelong resident of Wilkes-Barre and attended Saint Mary&#8217;s Church of the Immaculate Conception. She was employed for many years in the... View Obituary & Service Information

The family of Marion Ransom created this Life Tributes page to make it easy to share your memories.

With family at her side, Marion Ransom, 90, was called home on...