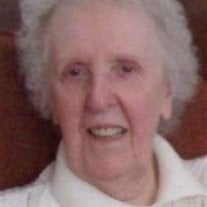 Marion E Keller, 90, of Wilkes-Barre, passed away Monday morning, April 8, 2013 at Mercy Center in Dallas. Marion, (“Sis” as she was known to her family), was born in Wilkes-Barre and was the daughter of the late Joseph and Elizabeth Fischer Keller. She was a member of St. Nicholas Roman Catholic Church in Wilkes-Barre. She attended St. Nicholas Grade School and was a graduate of St. Mary’s High School. She worked for many years for the Teamsters Union and then as a seamstress with the ILGWU. In her later years, she enjoyed making floral arrangements for her home and for family and friends for special occasions. She loved spending time with her family and especially her dogs, Abby, Buddy and Iris. They always brought a smile to her face and gave her a lot of joy and love. Sis was a gentle woman and a wonderful and loving Aunt. She will remain with us forever in our hearts. Marion was preceded in death by her sister, Dorothy Keller Geiser in 2007 and brother-in-law Leo Geiser in 2010. She is survived by a brother, Joseph Keller, NJ; Nieces Bethann Geiser, Wilkes-Barre; Diane Bennett and husband Richard, Wilkes-Barre; several other nieces and nephews and great nieces and nephews. The family would like to thank Durelle Scott, MD, John Carey, MD and Fran McGlynn, CRNP for the care they gave to Marion over the years. We would especially like to thank the Sisters of Mercy, all nurses, aides and staff at Mercy Center and all the healthcare professionals at Celtic Healthcare of NE PA, for the exceptional love, care and compassion that consistently was shown to Marion and our family during her care. A viewing will be held on Thursday, April 11, 2013 from 2 PM to 6 PM in The Chapel at Mercy Center, on the grounds of Misericordia University in Dallas. A Funeral Mass will be celebrated at 11:00 AM on Friday, April 12, 2013 at St. Nicholas Roman Catholic Church, 226 S. Washington St., Wilkes-Barre, PA. Relative and friends are invited to attend either or both of the above. In lieu of flowers, the family requests memorial contributions to be sent to Mercy Center, PO Box 370, Dallas, PA 18612; St. Nicholas Roman Catholic Church, 226 S. Washington St. Wilkes-Barre, PA 18701 or to a charity of the donor’s choice. Arrangements are by McLaughlin’s – The Family Funeral Service. Permanent messages and memories can be shared with Marion’s family at www.celebrateherlife.com

Marion E Keller, 90, of Wilkes-Barre, passed away Monday morning, April 8, 2013 at Mercy Center in Dallas. Marion, (“Sis” as she was known to her family), was born in Wilkes-Barre and was the daughter of the late Joseph and Elizabeth Fischer... View Obituary & Service Information

The family of Marion Keller created this Life Tributes page to make it easy to share your memories.