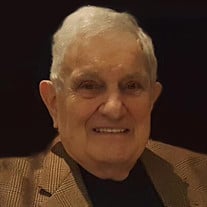 Mario J. Nardone, 92, of Wilkes-Barre, died peacefully at home on December 24, 2018. His parents, the late Vincent & Maria Pasquini Nardone immigrated to the United States, from Italy, in the early 1900s. Mario was the youngest of eight children, born May 30, 1926, in Wilkes-Barre. The Nardone Family had humble beginnings, where faith and family values were always important. Mario's father passed when he was just 6 months old. His mother, Maria, was blessed to have his siblings assist in his upbringing. Mario was a teenager during The Great Depression, attending Coughlin High School, but dropped out to help with the family business. He later completed his education in the service. Mario was drafted into the Navy during WWII, and officially signed up for baking school. Although he was stationed in Florida, his fleet never went to battle, and he returned to Wilkes-Barre after the war. It was there he met the love of his life, the late Mary Yosh. Mario and Mary met on a double date, although they weren't on the date with each other. He had a keen interest in the blonde-haired, blue-eyed lady, who was 10 years his junior. She was in nursing school at the time, and was forbidden to marry until she finished, so the couple eloped in October of 1956. Alongside his brothers, Mario continued to work day and night in the family business. Their small bread shop evolved to include pizza. The Nardone Bros. Baking Company would continue to grow to serve local schools and supermarkets, as well as local family-run stores. While delivering pizza in 1966, Mario was severely injured in an automobile accident. The doctors said he would never walk again. He spent 6 months in traction but was determined to recover and provide for his family. With the assistance of his amazing doctor, Jeffery Sternliebs, and his trusty cane, he learned to walk again. Mario enjoyed summer weekends by his pool, where he hosted his extended family. His children, nieces, and nephews fondly remember Sunday trips to Carvel in his prized '54 Chevy convertible. He was affectionately called "Uncle" by all and greeted everyone with his beautiful smile. Mario and Mary raised a family of four children and continued to live in marital bliss for over 35 years. Mary fell ill in December of 1990. Mario retired, and remained by her side, until she passed in June of 1991. Mario remained strongly rooted to his family, throughout his life. His two priorities were always work and family. He greatly enjoyed the relationships he cultivated, throughout his working days. He was fiercely loyal to those who were fortunate enough to call him a friend. He was an excellent listener, and an even better advisor. Mario's entire family is grateful for the care provided by his many caregivers throughout the years, especially his favorite, Corrine Bonk. Mario was a member of the Parish of Saint Nicholas. He was preceded in death by his brothers, Thomas, Anthony, Louis, and Frank and sisters, Josephine Nardone, Estelle Quinn, and Linda Nardone. Mario will be greatly missed by his daughters, Kathryn Bavaro and Kristin Herzing; his sons, Thomas Nardone and Mario Nardone; his grandchildren, Anthony, Christina, and Michael Bavaro; Lena, Genevieve and James Nardone; and his nieces, nephews, other family and friends. Celebration of Mario’s Life will begin Friday with visitation from 4 to 7 PM at McLaughlin’s, 142 South Washington Street in Wilkes-Barre and continue there on Saturday with gathering at 8 AM followed by a Funeral Mass at 9 AM in the Church of Saint Nicholas. Interment will be in Saint Mary’s Cemetery. In lieu of flowers, memorial donations can be made to St Jude's Children's Research Hospital. Memories and condolences may be shared with Mario’s family at www.celebratehislife.com

Mario J. Nardone, 92, of Wilkes-Barre, died peacefully at home on December 24, 2018. His parents, the late Vincent & Maria Pasquini Nardone immigrated to the United States, from Italy, in the early 1900s. Mario was the youngest of eight children,... View Obituary & Service Information

The family of Mario J. Nardone created this Life Tributes page to make it easy to share your memories.