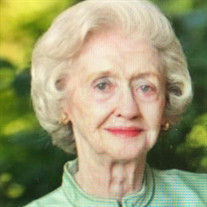 Margaret Grace Griffin, age 94, passed away peacefully in her sleep on September 1, 2019. She was preceded in death by her beloved husband Bernard and her siblings Mary Mundy, Josephine Lenahan, Ruth Lapadula and Edward Lenahan. She will be greatly missed by her daughter, Erin Nougaret (Andre) of South Carolina; grandsons Ryan Nougaret (Rebekah) of Florida, and Jordan Nougaret (Brianne) of Virginia and greatgrands Adelyn, Avery and Grady of Florida, and Pearl and Lily of Virginia, her niece Marilyn Killough, nephews James Mundy, Michael Lapadula and godson/nephew Marc Lapadula Margaret ( Margie) was born on Valentines Day, 1925 to Patrick “Neddy Day” and Mary Lenahan and raised in Wikes Barre, Pa. She attended St. Anne’s Academy for high school followed by Weylister Secretarial Junior College in Milford, Conn. She worked for the American Red Cross after college until she married the love of her life, Bernard (Bo) Griffin in 1950. She stayed at home until her daughter began school and then spent the rest of her working career (30 years) as the administrative assistant to the CEO of International Harvester in Washington, D.C. Margie and Bo moved to Fredericksburg VA after retirement to be near their daughter, son in law and grandsons and played a significant role in their lives growing up. When her daughter and son in law retired, she moved to Bluffton South Carolina where she lived with them until significant health issues necessitated her move to Broad Creek Care Center close by on Hilton Head Island where she was lovingly cared for by the staff and Hospice of the Low Country until her passing. Margie was an avid reader, mentally astute until the end, and kept herself up to date on all current events related to politics and sports. She was a strong, giving, compassionate woman and her loss is felt by all who love her. A Funeral Mass will be celebrated in the Church of Saint Mary of the Immaculate Conception, 130 South Washington Street in Wilkes Barre at 9:30 on Saturday, October 12, 2019 followed by her burial next to her husband in Saint Mary’s Cemetery. A luncheon reception for friends and family to celebrate Margie’s life will be held at the Wyoming Valley Country Club following the interment. In lieu of flowers, contributions can be made to Hospice of the Low Country, 7 Plantation Drive, Bluffton SC or to a charity of your choice. Memories and condolences may be shared with Margie’s family at www.celebrateherlife.com

Margaret Grace Griffin, age 94, passed away peacefully in her sleep on September 1, 2019. She was preceded in death by her beloved husband Bernard and her siblings Mary Mundy, Josephine Lenahan, Ruth Lapadula and Edward Lenahan. She will... View Obituary & Service Information

The family of Margaret Grace Griffin created this Life Tributes page to make it easy to share your memories.

Margaret Grace Griffin, age 94, passed away peacefully in her...