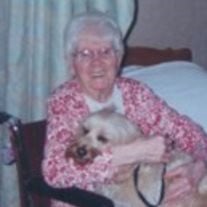 Margaret Clinton, 91, entered into eternal rest on March 12 following a long illness. Margaret, also known as Peggy, Mom, and Nana, was a life-long resident of Sugar Notch, a place she loved and never had any desire to leave. The second oldest of eleven children of Frank and Elvira Jones Kinney, she learned to share and care about others from day one, and she spent her life giving generously of herself and her time to countless family members, neighbors, and anyone who needed her. Aside from her family, her yard in Sugar Notch was her pride and joy, and the multiple flowers and trees she planted over the years will now annually pay tribute to her green thumb. She now joins the love of her life, her husband of sixty-eight years, Donny, for a very happy Saint Patrick's Day reunion. This love survived the long absences of World War II, as she plotted Donny's movements with pins on a map of the Pacific Theater and had faith she would get him back instead of that dreaded letter from the Army. She even participated in that select group of Sugar Notchers who kept night watch for Nazi bombers who might have the town in their crosshairs. She also stood by Donny during his other wars with physical decline towards the end of his days on earth, being always there for whatever he needed. Her grandchildren remember her for watching over them like a guardian angel so they would never get hurt and taking pride in all their accomplishments as they grew and developed. She enjoyed the simple life, and asked nothing but to enjoy her home, yard, family, neighbors, and pets. No one in the family had to write down birthdays, they just had to ask Nana, who had 100% accurate birthday recall for all family members and friends. She was preceded in death by her husband Donny; brothers, Frank, James, Robert, David, and Ivor; and sisters, Ellen, Rose, and Elizabeth. Margaret will be greatly missed by her daughter Maureen and her husband Dr. Mark Stair of Shavertown; grandchildren, Dr. Susannah Stair Holderer and her husband Jay of Kintnersville, Dr. Shannon Stair Bushong and her husband Brandon of Wilmington, Delaware and Dr. Erin Stair of New York City; great-grandchildren, Maggie, Jesse, Adam, and Katie Holderer and Winston and Sheldon Bushong; sister, Martha Saumo and husband Charlie; brother, Charles Kinney and wife Joan, along with numerous nieces and nephews; and her loveable feline friend AWOL. The entire family extends their gratitude and appreciation for the care rendered by the professional and caring staff of Hampton House during Margaret's illness, especially during her final period of permanent residence, and for a special friend, Maureen Finnegan, whose many visits to Margaret meant the world to her. Celebration of Margaret’s Life will begin Wednesday with visitation from 5 to 7 PM at McLaughlin’s – The Family Funeral Service, 142 South Washington Street in Wilkes-Barre. A Funeral Mass will be celebrated Thursday at 9:30 AM in the Church of Holy Family on Main Street in Sugar Notch. Interment will be in Saint Mary’s Cemetery in Hanover Township. Read Margaret's life story and share memories with her family at www.celebrateherlife.com

Margaret Clinton, 91, entered into eternal rest on March 12 following a long illness. Margaret, also known as Peggy, Mom, and Nana, was a life-long resident of Sugar Notch, a place she loved and never had any desire to leave. The second oldest... View Obituary & Service Information

The family of Margaret Clinton created this Life Tributes page to make it easy to share your memories.