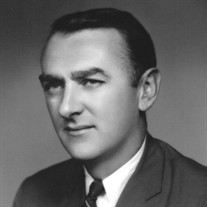 M. Clark Conlon, 90, a resident of Shavertown, passed away on October 28, 2021. Born on March 29, 1931 in Wilkes Barre he was a son of the late Mary McLaughlin and Paul Jerome Conlon. He grew up on Reynolds Street in Kingston and, later on, on the lake at Bear Creek. Clark attended Oliver School, Bear Creek, Wyoming Seminary Day School, and Wyoming Seminary Upper School, graduating in 1949. After graduating from Seminary, he embarked on an adventuresome and colorful gap year in Europe with first cousin Paul Griffin. Upon his return, he matriculated at Lafayette College, where he graduated in 1954. At Lafayette, he majored in History and was a member of Chi Phi fraternity. He was a devoted and loyal Lafayette alumnus, maintaining close friendships with his classmates for the rest of his life. Following graduation, he worked briefly as an Assistant U.S. Marshall before being drafted into the US Army. Clark was married to Rita Kilgallon in 1956 and commenced a career with the US Navy contracting department. He received his JD degree from George Washington University School of Law in 1964. After several years, he joined IBM Corporation, where he would spend the rest of his career working for IBM in Washington, DC, Huntsville, AL, Hong Kong, and Somers, NY. In 1984 Clark and Rita moved to Hong Kong with IBM, where they traveled widely in Asia and enjoyed the Hong Kong ex-pat life, playing bridge, traveling, and boating. In 1990 they returned to the US, living in Stamford, Connecticut until retirement, when they returned to the Wyoming Valley, taking up residence in Shavertown. Clark had a deep knowledge of the Wyoming Valley and its people and never tired of sharing stories of local history and characters with his family and friends. He pursued his boyhood passions with zest, including hunting, hiking, skiing and fishing with friends. In his spare time, he enjoyed reading about history, conservation, geology, the natural world, and writing up his own family history. He was a member of the Westmoreland Club and Huntsville Golf Club. His older brother, Paul Conlon, Jr, younger sister, Suzanne Conlon Smith, and son-in-law, Steve Disney, preceded him in death. His wife, Rita; daughters, Cathleen Conlon Disney and Lael Conlon Kiesling, and her husband, Gordon; grandchildren, Clark Disney of Chicago, IL, Christine Disney and her fiancé R. Chase Velarde of Denver, CO, LTJG Gordon Stewart Kiesling, Jr. of Jacksonville, FL, Conlon Kiesling of New York City, and Caroline Kiesling of Nashville, TN; sister, Mary Lou Danberg of Newark, DE; nieces, nephews, other family, and friends will miss him very much. Celebration of Clark's Life begins with visitation from 5 to 7 PM on Friday, November 12, 2021, at McLaughlin's, 142 South Washington Street in Wilkes-Barre and continues with a Funeral Mass at 10 AM on Saturday, November 13, 2021, in the Church of Saint Therese in Shavertown. Burial in Saint Mary's Cemetery will follow. Donations to Wyoming Seminary, 201 North Sprague Avenue, Kingston, PA 18704, will honor Clark's memory. Share memories and condolences with Clark's family at www.mjmclaughlin.com

M. Clark Conlon, 90, a resident of Shavertown, passed away on October 28, 2021. Born on March 29, 1931 in Wilkes Barre he was a son of the late Mary McLaughlin and Paul Jerome Conlon. He grew up on Reynolds Street in Kingston and, later on,... View Obituary & Service Information

The family of M. Clark Conlon created this Life Tributes page to make it easy to share your memories.

M. Clark Conlon, 90, a resident of Shavertown, passed away on...