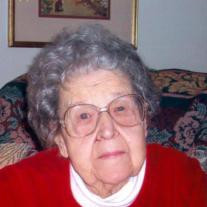 Leona C. Anstett, RN, age 98, formerly of Carey Ave. South Wilkes-Barre died April 22, 2010 at Manor Care Hampton House, Hanover Township where she had been a resident since June 2007. Mrs. Anstett was born October 16, 1911 in Plymouth daughter of the late Adam and Anna Benoska isslo She was a 1928 graduate of Plymouth High School and a 1931 graduate of the Wyoming Valley Homeopathic Hospital School of Nursing in Wilkes-Barre. In addition to her parents she was preceded in death by her husband, retired Wilkes-Barre City police detective John N. Anstett in 1979. Also predeceasing Leona were her brothers Joseph Kisslo, George Pavlik, sisters Martha Morris, and Bernadine Mooney. Leona had been employed as a private duty nurse and as a Supervisor at the Wyoming Valley Homeopathic Hospital prior to her marriage. After the death of her husband she worked as a volunteer Registered Nurse with the Wyoming Valley Chapter, American Red Cross for nearly twenty years. She assisted at blood drives throughout the Wyoming Valley. She was a member of Saint Nicholas Church, Wilkes-Barre and its Altar and Rosary Society. She had also been active with the WVHH Auxiliary and its Alumni Association, Branch 64 Catholic Knights of Saint George, FOP Lodge 36 Auxiliary, Saint Nicholas Church Scouting program and the Saint Theresa Little League Mother’s Club. Mrs. Anstett is survived by her son John J. and his wife Carol A. of Wilkes-Barre, granddaughter Erica N. Stehle and her husband Edward of Philadelphia, grandson John N. Anstett of Wilkes-Barre, nieces and nephews. The family would like to thank the entire staff at Hampton House, especially those working in the “C” wing for their kind, compassionate and professional care. Funeral services will be held Thursday at 9:00 AM from McLaughlin Family Funeral Service, 142 S. Washington St. Wilkes-Barre, Msgr. Joseph Rauscher will celebrate a funeral mass at 9:30 AM in St. Nicholas Church, S. Washington St. Wilkes-Barre Interment will be in St. Nicholas Cemetery, Shavertown. Friends may call Wednesday from 5-8 PM Memorial contributions if desired can be made in her name to Saint Nicholas Church, 226 South Washington Street Wilkes-Barre, PA 18701 or a charity of the donor’s choice.

The family of Leona C. Anstett created this Life Tributes page to make it easy to share your memories.