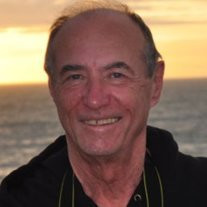 Kenneth Francis “Frank” Eick, 69, of Wilkes-Barre, passed away at home on Wednesday surrounded by his loving family. Born December 2, 1944 in Endicott, New York he was a son of the late Kenneth and Margaret Eick. Frank graduated from Union-Endicott High School. After proudly serving our country from 1965 to 1969 in the United States Air Force, he earned his baccalaureate degree from the State University of New York at Cortland. He enjoyed teaching at Bishop Hoban High School before beginning his 35-year career at Wilkes-Barre City Hall. In January of 2011, he retired from the Office of Community Development. Frank was a devout Catholic and member of the Parish of Saint Robert Bellarmine and the former Church of Saint Therese in Wilkes-Barre. Frank, above all, was a deeply devoted husband, father and grandfather who thoroughly enjoyed spending time with his family and cheering on Notre Dame, the New York Giants and the New York Mets. He is survived by his wife of 42 wonderful years, the former Carol Ann Burns; admiring children, Carol Ann and her husband Brian T. McMullen of Baltimore, Maryland, Christine and her husband Adrian Poliszczuk of Baltimore, Maryland, Colleen and her husband Michael Neff of Groton, Massachusetts, Francis K. and his wife Jessica Tenbus Eick of Wilkes-Barre and Mary Eick of Wilkes-Barre; the loves of his life; his grandchildren, Brian T. McMullen, Jr., Audrey Neff and Emma and Francis Eick; sisters, Karen A. King of Endicott, New York and Kenna Colacino of Newark, New York; a brother, Lawrence Eick of Missoula, Montana; numerous nieces, nephews, family and friends. Celebration of Frank’s Life will be held Monday at 9 AM from McLaughlin’s – The Family Funeral Service, 142 South Washington Street in Wilkes-Barre with Funeral Mass at 10 AM in the Church of Saint Aloysius. Interment will be at Saint Mary's Cemetery in Hanover Township. Visitation will be held at McLaughlin's on Sunday from 5 to 8 PM. In lieu of flowers, memorial donations may be made to Pancreatic Cancer Action Network, 1500 Rosecrans Avenue, Suite 200, Manhattan Beach, CA 90266. www.pancan.org Permanent messages and memories can be shared with Frank’s family at www.celebratehislife.com

Kenneth Francis &#8220;Frank&#8221; Eick, 69, of Wilkes-Barre, passed away at home on Wednesday surrounded by his loving family. Born December 2, 1944 in Endicott, New York he was a son of the late Kenneth and Margaret Eick. Frank graduated... View Obituary & Service Information

The family of Kenneth Francis 'Frank' Eick created this Life Tributes page to make it easy to share your memories.