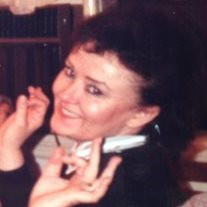 Kathleen Policare, 72, of Wilkes-Barre died Sunday at Golden Living Center - East Mountain. Born April 7, 1941 in Sunderland, County Durham, England she was a daughter of the late Thomas William and Dorothy Donkin Ward. Kathleen came to the United States as a young woman, living first in Brooklyn, New York before settling in Northeastern Pennsylvania several years later. She worked for McGuiness Company Food Brokers for many years and later owned and operated Policare's Hair Styling and Cuts 4 Kids with her husband, Michael. Kathy had a love of acting and was active in the Little Theater of Wilkes-Barre and even made an appearance in the movie The Molly Maguires. Mrs. Policare was a member of the First Presbyterian Church. Her husband, Michael S. Policare died February 20, 1999. A son, MCPO Steven M.S. Hunter, USN and sisters, Elizabeth, Lillian and Dorothy also preceded her in death. She will be greatly missed by her daughters, Donna DeNoto Bellitto of Florida and Dorothy (Dee) DeNoto Grilli of Plains; grandchildren, Angelo, Alexander and Arianne Grilli and Victoria Zampolino; sisters, Margaret Knight of Ottershaw, Surrey, England and Elsa Eadie of Chicago; nieces, nephews, other family and friends including a special friend, Florence Navitsky. Celebration of Kathleen’s Life will be held Friday at 11 AM in the First Presbyterian Church, South Franklin and East Northampton Streets in Wilkes-Barre with Rev. Dr. Robert Zanicky, officiating. Interment will be in Saint Rocco's Cemetery in Pittston. Visitation will be held Thursday from 4 to 7 PM at McLaughlin’s – The Family Funeral Service, 142 South Washington Street in Wilkes-Barre. Memorial donations are preferred and may be made to the charity of your preference. Permanent messages and memories can be shared with Kathleen’s family at www.celebrateherlife.com

The family of Kathleen Policare created this Life Tributes page to make it easy to share your memories.