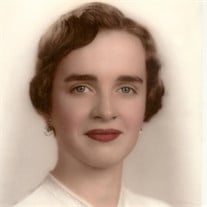 Kathleen McHenry, 85, loving wife and mother, passed away peacefully at Saint Luke’s Villa on September 30, 2017. Born January 5, 1932 in Johnstown she was a daughter of the late John and Mary Leach Maley. She was a graduate of Saint Mary’s High School in Wilkes-Barre. Kathleen was a teacher for Luzerne County Head Start before retiring. She was a long-time member of the Parish of Saint Therese in Wilkes-Barre and its choir. Brothers, Richard and John Maley, and a sister, Roseann Hogrebe, preceded her in death. Kathleen will be greatly missed by her husband of fifty-eight years, Frank; daughters, Patty McNulty and Carol and her husband Robert Suchoski; sons, Frank and his wife Suzanne, Paul and his wife Rhonda, and Matthew and his wife Kim; grandchildren, Kelly Monka, Kristen and Katie McNulty, Julie and Sarah Suchoski, Frankie and Rebecca McHenry, Blake Rankin, Luke and Emily McHenry, Lauren and Caitlyn McHenry; great-grandchildren, Aubrey and Frankie McHenry, Fiona Rose Dotzel and Quinn Kathleen Monka; sister, Mary Trevethan; brother, William Maley; nieces, nephews, other family and friends. Celebration of Kathleen’s Life will be held Wednesday with visitation beginning at 9 AM in the Chapel at Saint Luke’s Villa, 80 East Northampton Street in Wilkes-Barre. A Funeral Mass will be celebrated at 10 AM. Interment will be in Saint Mary’s Cemetery. Memories and condolences may be shared with Kathleen’s family at www.celebrateherlife.com

Kathleen McHenry, 85, loving wife and mother, passed away peacefully at Saint Luke&#8217;s Villa on September 30, 2017. Born January 5, 1932 in Johnstown she was a daughter of the late John and Mary Leach Maley. She was a graduate of Saint... View Obituary & Service Information

The family of Kathleen McHenry created this Life Tributes page to make it easy to share your memories.