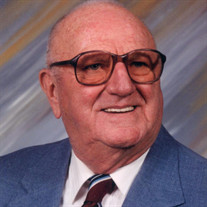 Joseph R. Proeller, 101, of Wilkes-Barre died December 12th after a short illness. Born March 4, 1913 in Wilkes-Barre he was a son of the late George J. and Anna Schappacher Proeller. Joe was a member of the 1931 graduating class of Coughlin High School where he lettered in both football and baseball. His Army service included forty-three months in the South Pacific with the 41st Infantry Division and he attained the rank of Staff Sergeant prior to his discharge. He was a life member of American Legion Post 558 and VFW Post 283 where he served as Judge Advocate and V.A.V. representative. Joe also served as president of the Potomac Chapter of the 41st Infantry Division Association. He was a very active volunteer at the VA Medical Center receiving multiple certificates of appreciation for his service. Joe's postwar employment included the John M. Kozik Bottling Co. and later the Pennsylvania Turnpike Commission until his retirement in 1976. He was a lifelong member of the Church of Saint Nicholas where he served as an usher and greeter at Mass and was an active member of its Holy Name Society which he served as Treasurer and President. His wife, Mary McGroarty Proeller died in 1988. Brothers, James, George, Francis and William Proeller and sisters, Alice Halter, Theresa Knauer, Mary Halter, Elizabeth Bitzer and Rita Hill also preceded him in death. He will be greatly missed by his son, Dr. George J. Proeller, D.CS of Colorado; daughter, Ellen and her husband Ted Dennis of Larksville; George’s daughters, Kathryn Nicoli and Jennifer Yates; Ellen’s children, Julie, T.J. and Becca Dennis; great-granddaughter, Lorenza Nicoli; nieces, nephews, other family and friends. Family was extremely important to Joe and he enjoyed many visits from his children and grandchildren, receiving many notes and cards from his family and lifelong friends, and hosting an annual gathering for all to enjoy. Celebration of Joe’s Life will be held Friday at 8:30 AM from McLaughlin’s, 142 South Washington Street in Wilkes-Barre with Funeral Mass at 9:30 AM in the Church of Saint Nicholas. Interment will be in Saint Mary's Cemetery. Visitation will be held at McLaughlin's on Thursday from 4 to 7 PM. Memorial donations are preferred and may be made to Saint Nicholas Building Fund or the charity of your preference. Permanent messages and memories can be shared with Joe’s family at www.lifecelebrations.com

Joseph R. Proeller, 101, of Wilkes-Barre died December 12th after a short illness. Born March 4, 1913 in Wilkes-Barre he was a son of the late George J. and Anna Schappacher Proeller. Joe was a member of the 1931 graduating class of Coughlin... View Obituary & Service Information

The family of Joseph R. Proeller created this Life Tributes page to make it easy to share your memories.