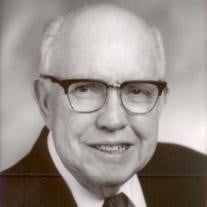 Joseph Francis Long, Sr. entered eternal rest on March 22, 2010 at Hospice Care of the VNA. Born October 26, 1922, Joe was a life-long resident of Wilkes-Barre and son of the late James and Catherine McAndrew Long. A 1941 graduate of E.L. Meyers High School, Joe earned his bachelors degree in accounting from the Wharton School of Finance of the University of Pennsylvania. Prior to retirement, Mr. Long was a financial consultant to the Luzerne County District Magisterial Court System from 1987 to 2004. Joe was employed by the Commonwealth of Pennsylvania’s Auditor General’s Department from 1975 until 1991. He served that agency as a field auditor and a supervisor in the County Audits Division. From 1972 to 1975, Mr. Long served as Office Manager for Durkin Distributing Company, the distributor of the Sunday Independent Newspaper. Upon his graduation from high school, Joe began a thirty-year career as an employee of American Chain and Cable Company working his way up from mail room clerk to Office Manager of the plant. Joe and his wife, Rose, were well known throughout the area for their volunteerism and fund raising expertise. Together they helped run more than four hundred “Night at the Races” events for various charities, children’s organizations, and churches. In addition, the Long’s were Finance co-chairmen for the Saint Aloysius Annual Bazaar. Mr. Long was a member of many different organizations and committees throughout his life. He was involved with the Saint Aloysius Holy Name Society serving that organization as treasurer and member of the Father-Son Breakfast Committee. Joe was an active member of the Greater Wilkes-Barre Donegal Society, serving that organization as treasurer and finance chairman for the Annual Irish Days Event. He was a long standing member of the Wilkes-Barre Friendly Sons of Saint Patrick. For his efforts in the community and with this organization, he was named the 1983 Friendly Sons of Saint Patrick Man of the Year. He was a member of the Tri-County Personnel Agency for numerous years serving as President of that agency in 1971. He also served the City of Wilkes-Barre as Vice-Chairman of the Redevelopment Authority. Through this agency he helped spearhead relief measures to revitalize Wilkes-Barre after the 1972 Agnes Flood. For his efforts he was awarded the “Key to the City” by the late Mayor Walter W. Lisman. In 1951, Joe was one of the founding members and treasurer of St. Therese’s Little League (South Wilkes-Barre Little League). In 1952, the same group established St. Therese’s Teener’s League (South Wilkes-Barre Teener’s League), then served in the capacity as treasurer with Teener’s Baseball Incorporated. This agency sponsored and ran the Annual Teener’s Baseball Tournament throughout Luzerne and Lackawanna Counties. In 1995, Mr. Long was selected and inducted into the South Wilkes-Barre Teeners’ Wall of Fame. As a child, Joe contracted polio. Because of his disability he was enrolled as the sixth member of the Wyoming Valley Children’s Association, (formerly Wyoming Valley Crippled Children’s Association). This began a lifelong commitment to that agency and its continued success. Mr. Long served on the Board of Directors for the WVCA and the agency became his devotion. Due to his involvement with WVCA, Joe chaired and ran the Annual March of Dimes Bowling Tournament throughout the late sixties and early seventies. Mr. Long, a staunch supporter of Catholic Education, served as treasurer of the Bishop Hoban’s Parents club from 1978 through 1993. He was also an advocate for Saint Aloysius Grade School. Joe valued and preached the benefits of such an education. In 1995, despite not being a Rotarian, he was awarded the Wilkes-Barre East Rotary Club’s highest honor, a Paul Harris Fellow. The award was bestowed upon him for his efforts in the community, and the life example he had set by overcoming polio. Mr. Long was an avid sports fan and his love for the Yankees, Celtics, and the Fighting Irish of Notre Dame is legendary. He was often found attending local high school sporting events with his wife Rosemary. In 1993, the Long’s were recognized for their dedication and support of high school sports by the Meyers Basketball Booster Club by naming an off-season basketball tournament in their honor. His loving wife and true partner through forty-three years of happy marriage, Rosemary Larkin Long died August 11, 2002. Sisters, Catherine Hirleman, Genevieve Conklin and Marguerite Long (infant), and a brother, James Long also preceded him in death. Joe’s love and dedication to his family were second to none. He will be sadly missed by all who knew him, but especially his children and grandchildren. Surviving are his daughter, Maureen and her husband William Conlon of Jenkins Township and son, Joseph, Jr. and his wife Jenny Long of Jenkins Township; grandchildren, Mary Kate, William, and Michael Conlon and Joseph III, Jack, and Julia Rose Long. He is also survived by special friends of the family Lori Parise Carter of Laurel, Maryland and Brian Parise of Selinsgrove; nieces and nephews. Celebration of Joe’s Life will be held Friday at 9:30 AM from McLaughlin’s Family Funeral Service, 142 South Washington Street in Wilkes-Barre with a Funeral Mass at 10 AM in the Church of Saint Aloysius. Interment will be in Saint Mary's Cemetery in Hanover Township. Visitation will be held at McLaughlin’s on Thursday from 4 to 8 PM. Joe’s entire family expresses their gratitude to the staff at Heritage House, the staff of the seventh floor Wilkes-Barre General Hospital and the Visiting Nurses Association Hospice Unit for the care and love given to their father and grandfather. Memorial donations are preferred and may be made to Wyoming Valley Children’s Association, Holy Redeemer High School, St. Mary’s Assumption School in Pittston, or the Greater Nanticoke Area Educational Center Library Fund.

Joseph Francis Long, Sr. entered eternal rest on March 22, 2010 at Hospice Care of the VNA. Born October 26, 1922, Joe was a life-long resident of Wilkes-Barre and son of the late James and Catherine McAndrew Long. A 1941 graduate of E.L.... View Obituary & Service Information

The family of Joseph F. Long created this Life Tributes page to make it easy to share your memories.