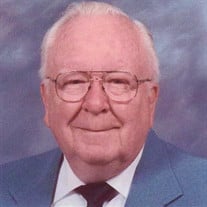 Joseph W. Balz, previously of Cherry Lane in Mountain Top, died on July 6, 2017. He was born on March 9, 1926, in Wilkes-Barre, son of the late Frank J. Balz and Emma Walter Balz. He graduated from St. Nicholas High School in 1944 and was an Eagle Scout in Troop 43 of that parish. He was a member of the high school varsity basketball and baseball teams. Mr. Balz served in the U.S. Navy during WW2 in the Armed Guard Service. In 1946, he began his employment with King’s College and continued in administrative capacities until shortly before his death, serving over 70 years. He enrolled in the first class at the College and graduated, cum laude, in 1950. Throughout his career he was involved in the financial and business management of the College, serving as chief financial officer for 25 years. He taught classes in business administration and was appointed director of the computing center in 1960. He was instrumental in the planning, construction, and development of the campus in North Wilkes-Barre. In 1996, he was awarded an honorary doctorate degree in recognition of 50 years of service. Mr. Balz was the recipient of the Lane D. Kilburn Award in 2003 and was the first recipient of the Juxta Crucem Award by the Eastern Province of the Congregation of Holy Cross in 2001. He received the Robert J. Ell Award for Outstanding Service to his Alma Mater in 2014. He was active in community affairs and served as a director on the boards of several local financial organizations. Mr. Balz was a founding member of the General Municipal Authority of the City of Wilkes-Barre and a director of the Blue Cross of NEP. He was active at St. Jude Church in Mountaintop where he served as chairman of the Finance Council and served on other committees and ministries including Eucharistic Minister. He participated in educational professional organizations and was an evaluator for the Middle States Association of Schools and Colleges and a consultant to the Pennsylvania Council of Independent Colleges and Universities. He also served on several advisory committees to the Wilkes-Barre Area School Board and to the Eastern Province of the Congregation of Holy Cross. He was preceded in death by his wife of 51 years, Ann Pendergast Balz, his parents and brothers, Charles and Bernard. He is survived by sons, Frank, Arlington Virginia, his wife Lily and his children Joanna, Alison, Grace and great grandchildren Chase, Nate, Allie and Penelope; John and his wife Ann, Portsmouth, N.H., their children, Magdalene and Eileen; Dr. Thomas and his wife Monica, Danville, their children, Joseph and Kathleen; Dr. James and his wife Paula, Walden N.Y., their children, Michael, Christina and Amanda; Gerard and his wife Anne, Mechanicsburg, their children, Marielle and Curtis; and sister Marian Baltrusaitis, Croydon, Pa. Celebration of Joe’s Life will begin Monday with visitation from 4 to 7 PM at the Chapel of Christ the King at King’s College and continue on Tuesday with a Funeral Mass at 10 AM at the Parish of Saint Jude in Mountain Top. Interment will be in Saint Mary’s Cemetery. In lieu of flowers, memorial contributions may be made to the Ann P. Balz Memorial Scholarship at King’s College or St. Jude Church Building Fund. Memories and condolences may be shared with Joe’s family at www.celebratehislife.com

Joseph W. Balz, previously of Cherry Lane in Mountain Top, died on July 6, 2017. He was born on March 9, 1926, in Wilkes-Barre, son of the late Frank J. Balz and Emma Walter Balz. He graduated from St. Nicholas High School in 1944 and was... View Obituary & Service Information

The family of Joseph W. Balz created this Life Tributes page to make it easy to share your memories.